One of the great things about living in Connecticut is the wealth of experience in the birding community.  The atlas team is taking advantage of that expertise not only to help us gather data, but also to provide insights to help volunteers become better atlasers.  Here, Connecticut Warbler editor and long-time birder, Greg Hanisek provides tips on finding evidence for breeding hawks in your block:

Red-tailed Hawks are on their nests. With no leaves on the deciduous trees they favor, now is the time to log some Atlas confirmations. When I lived in rural northwestern New Jersey I spent a couple of years systematically studying Red-tailed Hawk nests, so I offered to share some thoughts on finding them.

At this time of year many large nests are visible in leafless trees, but few of them belong to hawks. In most areas the majority are the work of Gray Squirrels. In general, these are round, made of deciduous leaves and are situated in small branches. Some may be bigger and take other forms, but the predominance of leaves will usually eliminated Red-taileds.

Red-taileds are big birds with big nests, substantial structures made of large, sturdy sticks. They’re usually broad and flat, and they’re placed in a substantial crotch of branches fairly high in big trees. A nest made of smaller sticks anchored in small branches probably belongs to something else, such as a crow. Red-taileds are birds of open country, and they usually choose nest sites adjacent to fields or other open areas. Woodlots are prime nesting locations. Because the nests are conspicuous once you know what to look for, you can spot them from some distance. This eliminates the need for disturbance and provides a good viewing angle with a telescope, which may be needed to see if an adult is hunkered down on the nest.

These circumstances lend themselves to cruising around in a vehicle looking for potential occupied nests, so you can cover a lot of ground in the search. Nests along major highway corridors are not unusual. A bonus may be discovery of a Great Horned Owl in residence on a nest built by Red-taileds. Again avoiding disturbance is quite easy given the circumstances of most nests, and close approach is never advised or necessary.

Red-shouldered Hawks are also active right now. I’ve seen three copulations occur over a four-day period ending Monday. These are noisy birds, and I learned very quickly that if I quietly hang around a calling one it may be joined by a mate. On the three aforementioned occasions, a bird calling from a fairly low perch was joined by another that flew in very directly, landed next to it on a mid-level branch and commenced mating.

I haven’t yet found a nest associated with these three events, but Red-shouldereds build smaller nests than Red-taileds and favor less conspicuous places. I think they also nest a bit later. When I was doing Big Days in N.J., we found Red-shouldereds on nests in May, after most Red-taileds had fledged. 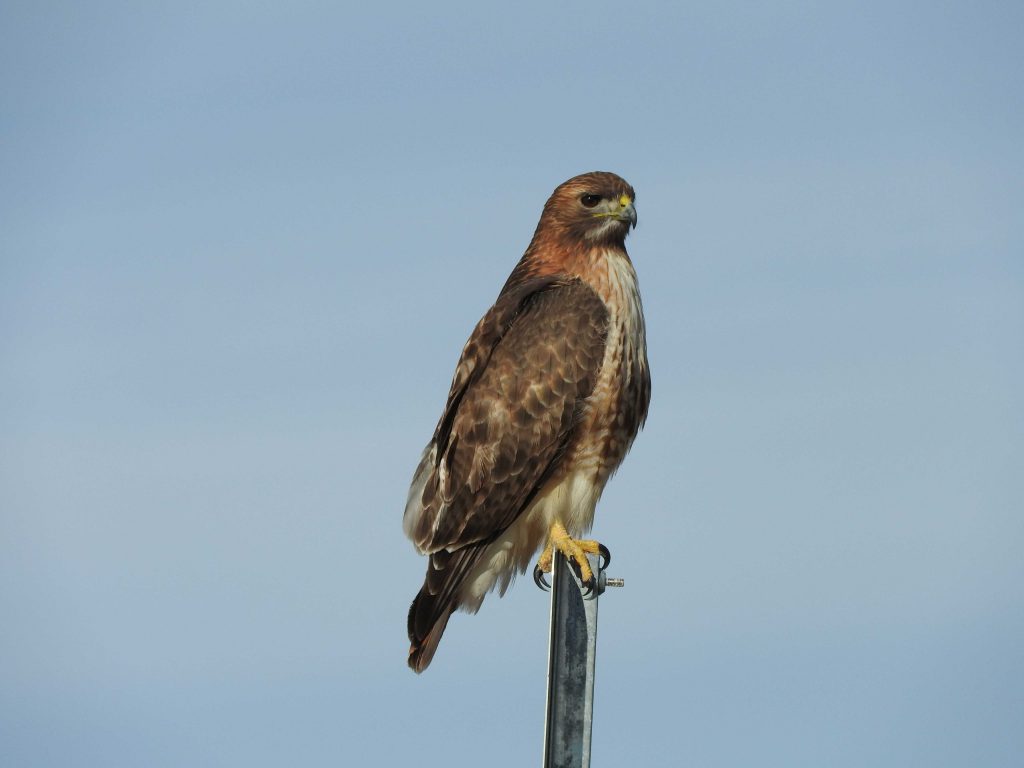 This red-tailed hawk is one of a pair that I’ve been seeing frequently on Horsebarn Hill in Storrs.  This site is right on the boundary between two blocks though, so I clearly need to follow Greg’s tips to figure out exactly which block they are nesting in.  More info on identifying large nests can be found here.

One Reply to “Nesting hawks”