Over the past two weeks, people have been reporting American woodcocks displaying at sites throughout the state. So, this weekend, just before dark, I made the 5-minute trek to the nearest overgrown field to my house to see if I could document them in atlas block 40F.  Sure enough, shortly after 7 pm, I heard a distant “bzzzt”, followed quickly by another, and another.  Over the next 20 minutes I also saw several display flights high up into the sky.

Prompted by an email from Greg Hanisek, I also dug around in the literature and emailed with a couple of woodcock biologists to try to find out if migrating males engage in courtship displays before they get to their breeding sites.  As I noted in a recent post ducks will begin to display long before they reach the breeding grounds, so a courting duck is not necessarily a sign of local breeding.  Similarly, many species of songbirds begin to sing while on migration – every year I hear white-throated sparrows and blackpoll warblers singing in my yard, though neither nests nearby.

It seems there is some debate, but the consensus is that birds will display on migration, which is why we have set safe dates starting in mid-April for this species.  On the other hand, woodcocks are early nesters, with females laying eggs by the first week of April, so it is likely that many displaying birds really are local breeders, even though there might be migrants in the mix too.

Another consideration when deciding whether to report these birds to the atlas is the difficulty of detecting woodcocks later in the year, or of confirming breeding.  During the first breeding atlas in the 1980s, George Clark wrote “Because the birds breed substantially earlier than most species in the state … it seems likely that the birds could have been missed in many of the areas from which they were not reported …”.  That birds were simply missed was a particular concern for eastern Connecticut, where survey effort was lower.

The map below shows the distribution from the 1980s atlas and shows both how few blocks the species was confirmed to breed in and the paucity of records from eastern Connecticut. 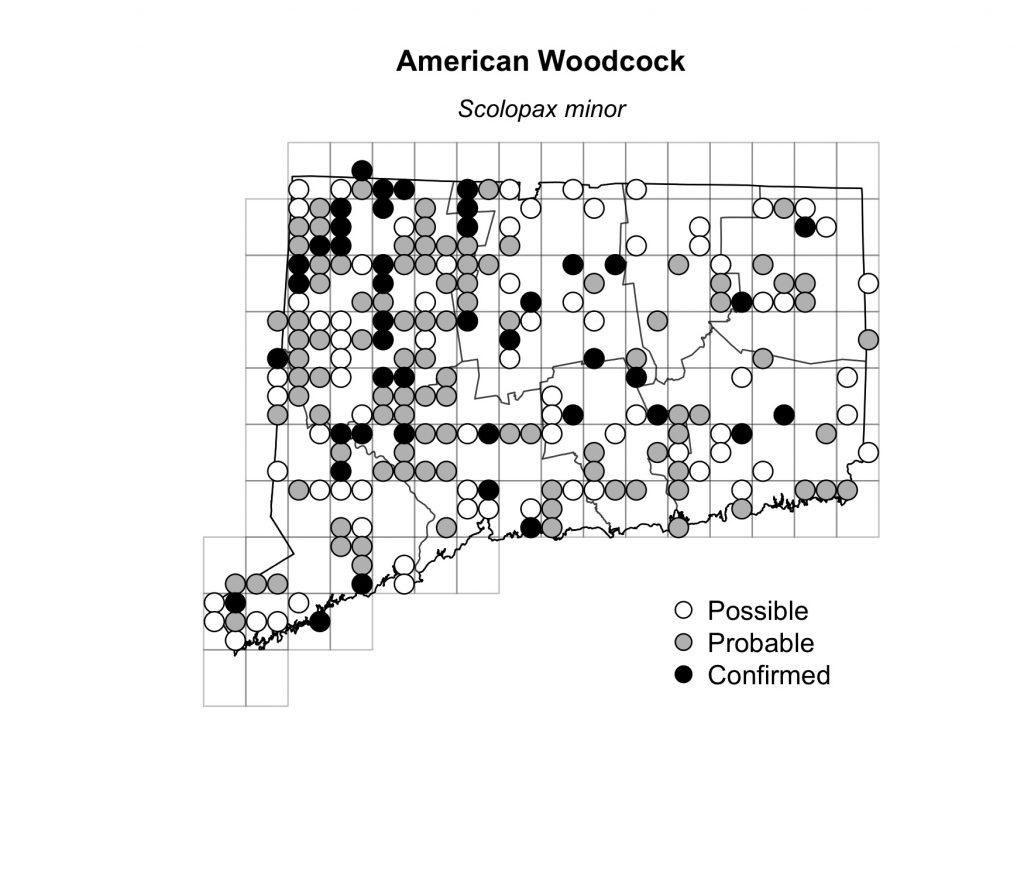 For all these reasons, it is a good idea to report any displaying woodcocks you encounter (breeding code C for courtship), as long as they are seen in suitable nesting habitat (e.g., overgrown, shrubby fields). When we analyze the atlas data we will look to see whether early records skew our findings in ways that suggest we should abide closely by the safe dates, but for now, all records of displaying woodcocks would be appreciated.  For information on how to submit data from evening woodcock watches, go here.