During the 1982-86 Connecticut Breeding Bird Atlas, the nesting range of Yellow-bellied Sapsucker was limited essentially to the northern part of Litchfield County (see map below). When I moved to Connecticut in 1992, one had to visit places at or above the latitude of the town of Litchfield to find them during the breeding season.

That began to change through the 1990s, and since then summering (and presumably breeding) sapsuckers have made a significant southbound range extension, primarily in the western part of the state, as well as spreading east. One of the many interesting results of the current Connecticut Bird Atlas will be to document the extent and magnitude of these changes.

In order to accomplish this, participants will need to familiarize themselves with abundant aural clues served up by these noisy birds (listen to examples here). Sapsuckers are prodigious drummers on their breeding territories, and fortunately for anyone surveying their presence, their drums are distinctive. Most other local woodpeckers (Pileated is somewhat of an exception) possess a simple staccato drum that are hard to assign to species without a lot of practice (though see this post on distinguishing the drums of Downy vs Hairy).

Birds of North America Online provides this very apt description for sapsuckers: “Drums usually begin with several rapidly repeated strikes in an “introductory roll” (often increasing in rate of striking within the roll), followed by a pause, then more strikes in irregular cadence. Among woodpeckers, drum of all sapsucker species notable for ‘slowness and irregularity’.” In places with multiple sapsucker territories, counter-drumming can be frequent.

This is often accompanied by an array of vocalizations that far exceed in range and intensity the quiet “mewing” of wintering sapsuckers. To give some idea of the range of these sounds, BNA lists the following Vocal Array (with verbal descriptions of each):

You get the idea. If you familiarize yourself with the drums and vocalizations you will be able to detect the presence of sapsuckers in your block. They’re drumming now. On a visit to River Road in Kent on April 15 I was able to tally at least 12 individuals by drums, counter-drums, and an array of calls. Some of these recall Red-shouldered Hawks, and Blue Jays can match some of them. However, sapsuckers are not shy birds at this time of year, and once you hear one you should be able to get a look at it.

The literature attributes drumming to both territorial defense and attraction of mates, so it’s a good indication of probable breeding and of the likely breeding range. However, as noted by Chris in a previous blog post, confirmation of any woodpecker breeding requires careful observation. Hal Harrison, in A Field Gide to Birds’ Nests, offers this note: “Author watched a pair in Maine complete a nest cavity in live aspen in June 1968, which remained unused until eggs laid in May 1969.”

The safe date for sapsuckers is listed as May 20 because migrants could be passing through the state until that date, but noting territorial behavior now will set the stage for later investigation and confirmations. When nests are found, recording the tree species would be desirable, to see which are being chosen in the expanded range. Harrison lists Aspen as a favorite. (Species of nest trees can be added as a species comment in eBird reports or added as a comment in the margin of the field card.) 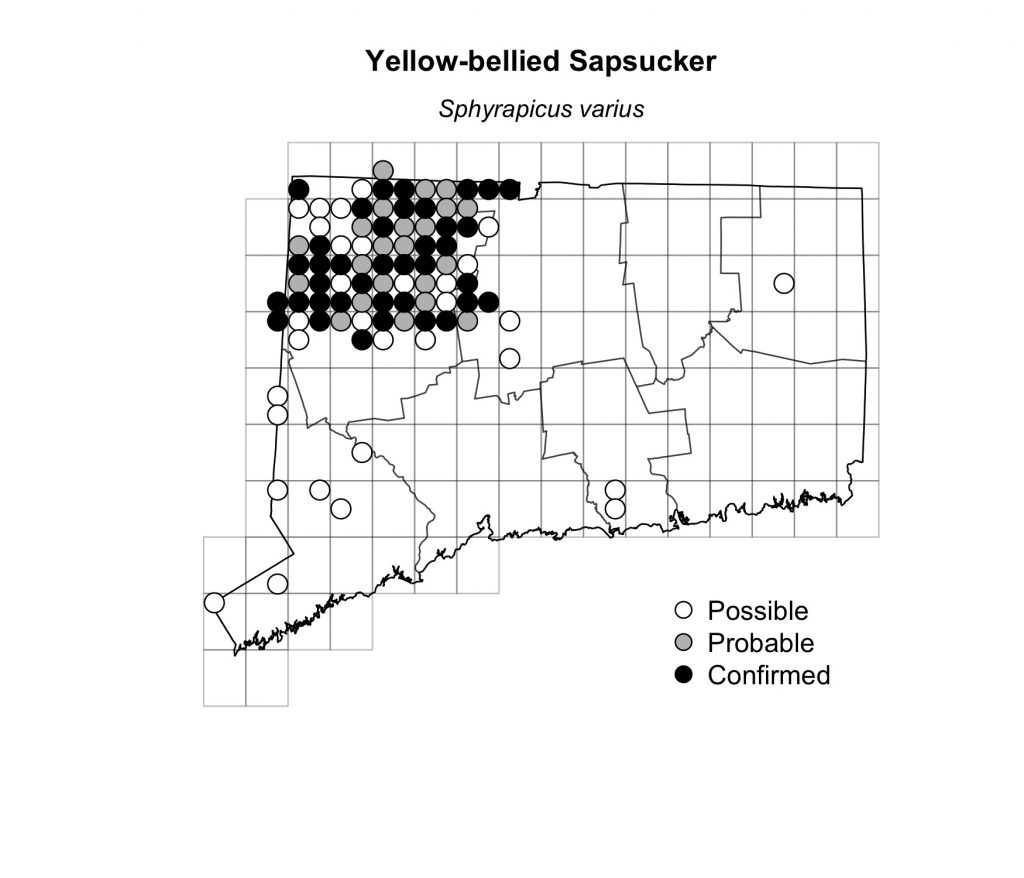