A week or so ago, I provided two rules of thumb to reduce confusion over the use of safe dates:

1. If you are unsure whether to submit a record, do so.
2. Always submit any record that confirms breeding (i.e., warrants a 2-letter code).

The second rule has a firm basis in the way we will use the atlas data – anything that is confirmed is a solid record no matter what.  The first rule, however, simply defers the decision of what to include to us during the data management phase of the project.  This is good in that it means we can standardize what gets included and what does not, but we still have to decide when a record is counted as breeding evidence.

Sightings outside of safe dates often do indicate breeding, but it is harder to be certain when species are still migrating or moving around.  For example, the broad-winged hawk I saw in my yard today might stick around to breed, but it might just have been taking a break before continuing its migration to southern Canada.  Consequently, I chose not to submit a breeding code for the hawk even though it was in suitable breeding habitat.

Species that are present year-round are even trickier to make decisions about.  Many of the white-breasted nuthatches I’ve seen in recent weeks are probably nesting nearby.  But, nuthatches are at least somewhat migratory, so how can I be sure about any particular bird?  In most cases, I have not entered a breeding code and I figure I will wait until later in the summer when I can be confident the birds are not just moving through.  There are exceptions though.

For instance, recently I had a pair of nuthatches (sexed based on crown color; code P), courtship feeding (code C), outside a nest hole that I’ve seen used by nuthatches in previous years and which both were seen to inspect (code N).  We’re still outside the safe dates for the species, but I feel pretty good about recording that observation as code N (the strongest breeding evidence observed).  Since it is still early, though, I also included notes in my record submission to justify the use of that code on such an early date.  These notes don’t need to be especially long, just enough to back up the record.  I also happened to have my camera at hand and was able to take a photo that shows both birds at the nest hole, one with a seed in its beak, thus providing corroborating evidence for all three of the codes mentioned above.  This is what the record looks like in eBird: 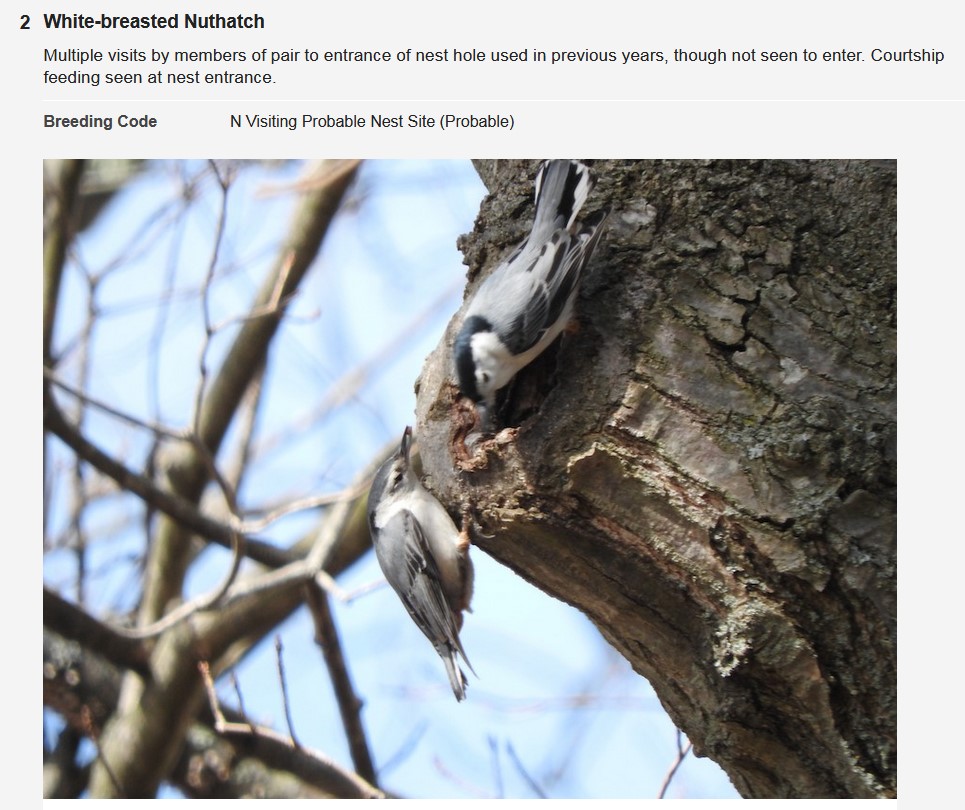 If you are not an eBird user, then the notes can be submitted via the projects rare reports form.  Clearly one wouldn’t want to go to this much trouble for every singing bird outside of its safe dates.  But, if you have an observation that you think provides strong evidence for nesting, even though it is outside the safe dates and doesn’t confirm breeding, providing these supporting details can help to back up the record.  For species that are rare or hard to confirm, submitting this information is especially valuable.