For the breeding portion of the atlas we are asking block adopters to commit to 20 hours of time spent looking for breeding birds in their block over the course of the three-year study.  To some, this does not seem like very much time and many have asked whether 20 hours is enough time to adequately survey a block, and whether then can spend more time.

The short answer is that you can spend as much time as you like in your block – we will take (and use) as much data as you send us.

The longer answer is a bit more complicated.  First, 20 hours should be viewed as a guideline, rather than a formal part of the protocol.  In our analyses we will use the total amount of time spent in a block, no matter how long that is.  For this reason, it is important to report the time you spend on each survey, so that we can account for the different amount of time spent in each block.

Second, 20 hours probably is not enough time to exhaustively search your block or find every species that occurs there.  But, based on other atlas studies, it probably is enough time to find most of them.  For example, the graph below – based on data from one of the first bird atlases ever done – plots the proportion of species that have been detected in a block against the number of hours spent surveying.  Although species continue to be added, even after 100 hours, you can see that the rate of additions slows dramatically after 20-25 hours.  For this reason, we are aiming to get at least this level of survey effort in every block. 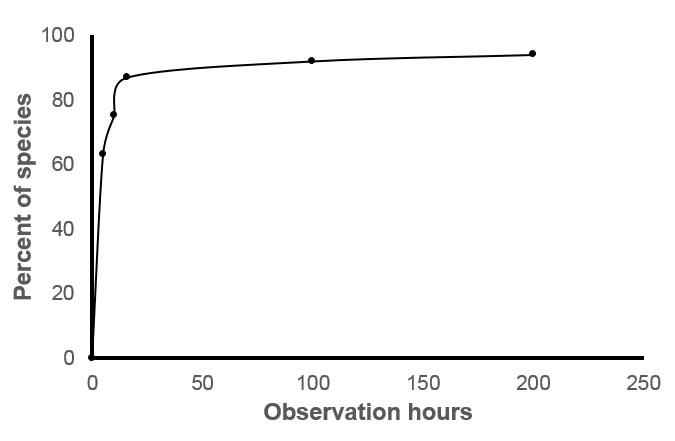 Rate of increase in the proportion of species detected in an atlas block, with increased time spent searching.  Data come from The Atlas of Breeding Birds in Britain and Ireland (Sharrock 1976).

So, when we say that people should aim to spend 20 hours in their block, we are not saying stop surveying when you reach that limit.  Instead, we are hoping that once 20 hours have been completed, people will turn their attention to a new block that has not yet been surveyed.  All else being equal, we will get much more information if people spend time in blocks with less than 20 hours of survey effort than in blocks with more.  But, if you are birding in a block that already has 20 hours anyway, or if getting to a poorly surveyed block is not an option but you still want to go birding, or if you just really need to try to find that prairie warbler because you know there’s one somewhere in your block, then don’t let us stop you!