As we’ve noted before, the CF (carrying food for young) breeding code is problematic for species that regularly carry food for their own consumption. This code is designed specifically for cases where birds are presumed to be carrying food to their dependent young and it can be hard to determine whether that is the case sometimes. Many species can be seen with food in their beaks temporarily. But if they are going to eat it, they usually do so right away. Careful observation for a minute or two will usually ensure that the code is not misused.

Raptors (hawks, harriers, osprey, falcons, owls), corvids (crows, jays, ravens), and kingfishers, frequently carry prey for some distance, though, before settling in to eat. For example, I often see osprey carrying fish over the UConn campus during fall migration – presumably because they are looking for a good place to perch and eat their catch. For these species, distinguishing carrying food for young from simply carrying food can be impossible.

The CF code is also a problem for species that travel long distances to forage because you might see them in a block that is different from the one they nest in. Terns, for example, can travel many miles from their breeding colony to forage. So, even if a tern is carrying a fish for its chicks, it might be that those chicks are in a different block from where the observation takes place.

Over the past week or two, I’ve realized that cuckoos should perhaps be added to the list of species for which the CF code should not be used – or, at least, used only with caution. This is because cuckoos often “prepare” their prey before eating – especially hairy caterpillars, with bristles that need to be removed to make the meal more palatable. Consequently, cuckoos can sometimes be seen flying around with food in their beaks while they look for a suitable perch on which to prep their food. Careful observation will be required to ensure that this is not the case. If a cuckoo is seen carrying food, however, watching to see where it goes might be a good way to find a nest or recently fledged young.

Although cuckoos are notorious for being brood parasites, and laying their eggs in other birds’ nests, this behavior is relatively uncommon in the two species found in Connecticut. (Videos you might have seen of baby cuckoos pushing the eggs of their hosts out of a nest, or pictures of massive chicks being fed by diminutive songbirds, usually involve the common cuckoo of Eurasia.) Instead, both birds in a pair will build a nest that is usually placed across horizontal branches in a tree or bush.  Black-billed cuckoos tend to build nests a few feet off the ground, yellow-billed somewhat higher – although much higher is possible in both species.  Interestingly, there’s evidence that brood parasitism is more common in years with abundant food, so the ongoing gypsy moth outbreak might mean that there are more cuckoo eggs being laid in other birds’ nests than normal.  Should that happen, both the cuckoo and the host species would be confirmed.

For an example of what a black-billed cuckoo nest looks like, view this short video here. 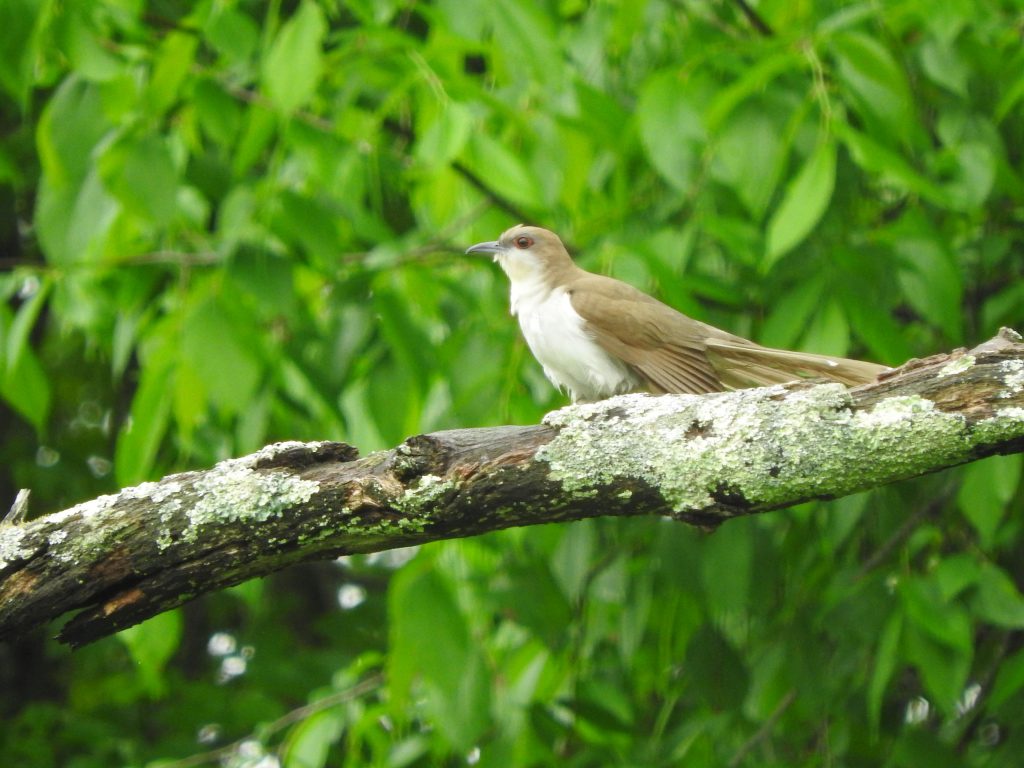