Yesterday, I wrote about the problem of birds moving across block boundaries, and how that can complicate the assignment of breeding codes. A related problem involves accurately identifying the block that a given observation falls in, and arises when a birding site lies on the boundary between blocks.

We’ve addressed this problem on the atlas web site and I also wrote about it a few weeks ago in a post about East Rock Park on the CTBirds listserve, but it’s a sufficiently serious issue that it bears revisiting.  The concern arises in two forms.  The first case is when an observer keeps a single checklist for a site that straddles a block boundary.  Even if they note which birds were in which block in the comments associated with the checklist, there is a risk that all observations will be assigned to the block that the checklist location lies in.  This risk is especially high for eBird submissions where the data are automatically added to the atlas database.  Extracting data from eBird comments sections is almost impossible, and the only way to obtain it is to read every checklist and then reenter the data into the atlas database manually.  Although eBird checklists are quickly reviewed before being accepted to the atlas eBird account, reading every comment would take many hours a day, which is unfortunately not possible given the volume of data coming in.

This first problem can be made worse when people use eBird hotspots, or existing personal locations, to locate their checklist.  When we take atlas records from an eBird checklist, every species on that list is assigned to the point location chosen for the checklist.  If this point is in the same block as the observations, then it works beautifully and every bird is correctly assigned to the right block.  But, if species on the checklist come from more than one block, some will be mis-assigned.  And, if you use an existing hotspot location, especially for a large site, it is possible that the entire checklist will be misclassified if you spend all of your birding time across the border from where the hotspot pin lies.

The links above provide examples of places where this problem arises, but there are many others around the state, and it is always worth checking whether the site you are birding lies on a block boundary.  This week, I discovered perhaps the worst case scenario.  Rentschler Field in East Hartford is well known both because it harbors species that are very rare breeders in Connecticut and because, being private property, there is very limited access to birders.  It is possible, though, to see many of the site’s specialty birds from the parking lots around the Cabela’s store at the north end of the site.  Consequently, most people use the Cabela’s eBird hotspot for their sightings.

While visiting the site on my way home from a meeting the other day, I was lucky enough to see some upland sandpipers.  Because they were fairly distant, I used the Google Earth app on my phone to check if they were in the same block as the hotspot.  They were not.  In fact, there are four different blocks that all converge on Rentschler’s Field and parts of at least three can be easily discerned from Cabela’s. 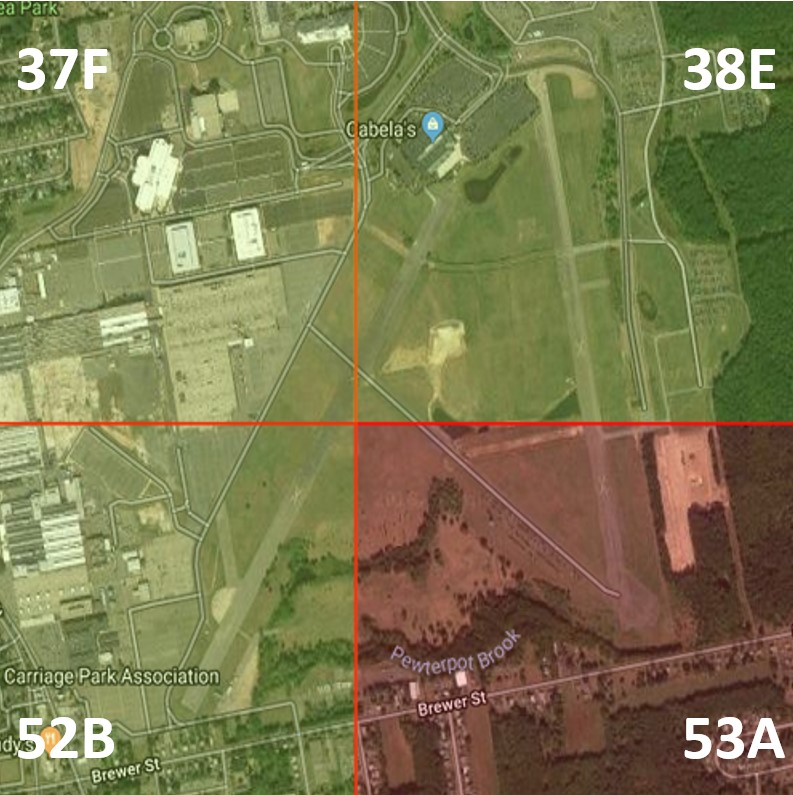 Google Earth image showing Rentschler Field in East Hartford.  Red lines show the boundaries between blocks, four of which include part of this site.

My sandpiper observations were all from block 37F, and this is where most of this year’s eBird reports that use personal locations come from.  Additionally, there are a number of reports that use the Cabela’s hotspot – whether these are for birds seen in block 38E, or if birds were simply seen from Cabela’s, is hard to know for sure, though.

Clearly, this is a special case, involving an endangered species at a well-known site. Consequently, we will be following up to ensure that we do not assign the same birds to multiple blocks – and that, as best we can, we place birds in the block(s) they are most likely to use for breeding.  The atlas team only has the capacity to do this in special cases, however, and generally will be relying on volunteers to make accurate block assignments when they submit data.

The solution to these problems is simply to maintain separate lists for each block, either by sending in different forms or by creating separate personal locations in eBird and keeping multiple lists.  For instance, during my visit I used the Cabela’s hotspot for all birds seen in block 38E, but created a separate personal hotspot for the upland sandpipers, which were the only birds I saw in block 37F.  This solution is, admittedly, a little cumbersome.  But, it provides more precise information about where birds are seen, which has the added benefit of improving our ability to link bird occurrence with habitat features that can be measured with remote sensing data.  This in turn will allow us to develop a better understanding of the subtle ways in which habitat affects species occurrence.