One of the challenges with any atlas project is completing survey work in areas where few birders live.  In Connecticut, the far north and the eastern third of the state, are the challenges, as shown in the two maps below: 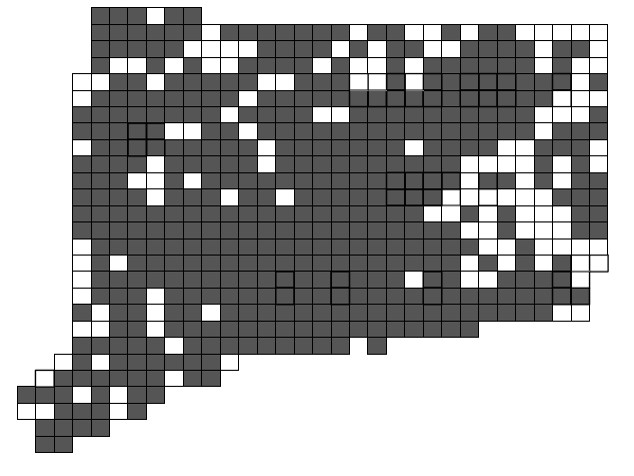 Map of Connecticut Bird Atlas blocks. White blocks are those that have no lead observer to ensure that the block is surveyed (updated 1 June 2019). A common solution to this problem is to run “block-busting” events, where a group of birders team up to spend a day or two birding an area to ensure adequate coverage.  Last weekend, the New Haven Bird Club organized the first of these for the atlas, and below is a report on their efforts from Craig Repasz:

Nine members of the New Haven Bird Club trekked out to the Pachaug State Forest on June 2. They had just experienced one of the best spring bird migrations in recent memory. Although most of the club members stay around New Haven county for their spring birding, they were ready to venture to a remote corner of the state and slow down to survey birds during the breeding season. The goal of the Bird Club members was to split into block-busting teams and hit several areas in a CT Bird Atlas block. The goal of block busting is to send a group of birders to a block that is either orphaned or has received little coverage. The NHBC team surveyed one block in the morning (74C Voluntown), and another in the afternoon (73D Jewett City). The combined effort for the day was around 27 hours on each block, completing the minimum number of survey hours (20) needed.

Most bird species are within their safe dates by the first weekend of June, meaning that most of the migrants have likely moved through and any birds encountered should be local breeders. Many species are also well into their nesting cycle by this time, increasing the chance of confirming breeding.

Overall, the group recorded 63 species. Most species had possible breeding status, either singing (S) or individuals in suitable breeding habitat (H). The group did encounter several species exhibiting probable breeding as multiple males were singing (M), pairs were observed (P), and there were several displays of territorial fighting (T). These possible and probable observations help to lay benchmarks for future efforts to confirm breeding by a group or individual birders in the future.

There were also 17 species confirmed as breeding in the two blocks.

The New Haven Bird Club members immensely enjoyed the day and are planning another event later in June.

If other bird clubs – or groups of birders – are interested in exploring a new part of the state and conducting a block-busting event, please contact Craig Repasz via ctbirdatlasvol@gmail.com for suggestions of blocks where we could most use the extra help.