Determining which breeding codes apply to which birds seen while atlasing is generally not too hard. There are exceptions, though, and one of the trickiest species is chimney swift.They spend most of their time in flight, and can travel long distances from their nests; males and females look alike, making it hard to identify pairs; they have tiny bills and eat often tinier prey, making it hard to see whether they are carrying food; their nests are hardly ever visible to an observer; and fledged youngsters are difficult to distinguish from adults.

This Monday was chimney swift beer night in Willimantic, an event that has become an annual tradition at the Willimantic Brewing Company. Each year, the brewmaster produces a batch of Flying Cigar Ale – a beer named after chimney swifts – and opens up the brewery to allow swift researchers from the University of Connecticut and the state’s Department of Energy and Environmental Protection to talk with those who would like to learn about these birds. As dusk approaches everyone convenes outside to watch swifts pile into one of two chimneys in town that each support several 100 roosting birds nightly during the summer.

One of the reasons for the event is to highlight documented declines of swifts and other aerial insectivores throughout parts of North America. For this reason, we too are especially keen to get swift records for the atlas. 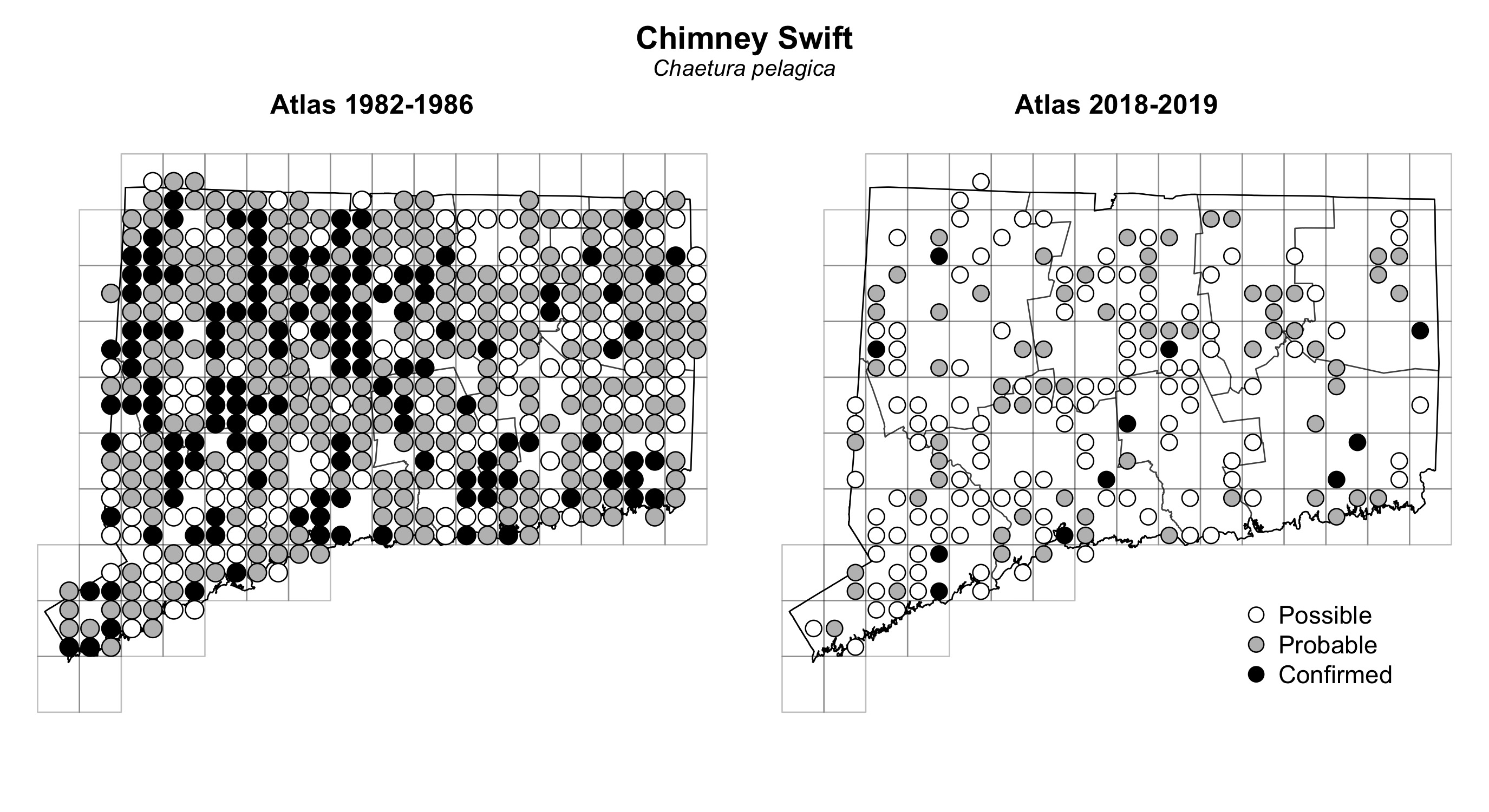 Breeding atlas reports of chimney swifts in Connecticut during the 1980s (left) and during 2018 (plus 2019 so far, right). A key question for this year and next, is whether the apparent difference is real, or if we just need better survey effort to fill in the gaps.

Identifying the birds – with their swept-back, sickle-shaped wings, cigar-shaped bodies, fast flight, and high pitched twittering – is not hard. And, any place you see them, where there are houses with uncapped chimneys nearby, would warrant the use of the possible breeding code H to indicate their presence in suitable breeding habitat. Because chimney swifts will also nest in air vents, barns and other out buildings, hollow trees, and caves, there do not even need to be chimneys for nesting habitat to be nearby.

Swifts do not really have a song, and specific breeding vocalizations are not well known, so the S and M breeding codes should not be used. Similarly, some probable breeding codes are hard to apply, although displays – in which pairs fly close together, with the rear bird suddenly fixing its wings into a V shape (sometimes followed by the front bird doing the same) – are often observed and warrant the use of the P breeding code. Early in the summer, groups of three birds – often a female and two males – engage in synchronized “trio flights”, a form of courtship (code C), in which they fly close together, fast, and often high, while intensify their rate of calling. Note that simply seeing two swifts together in the same place is not sufficient to call them a breeding pair, because it is impossible to know if they are even a male and a female.

The other probable breeding code that can sometimes be used is N. Simply seeing a bird entering a chimney, though is not enough – especially if that visit occurs in the evening. This is because swifts both roost and nest in chimneys, and roost sites are often not nest sites – the big communal roosts, like those in Willimantic, are especially unlikely to be used for nesting. Swifts will visit roost sites during the day, especially if the weather is poor, but if you see a bird going into chimneys during the day in good weather, then it is reasonable to call it a probable nest site.

Because chimneys are used both for roosting and nesting, confirming breeding is also hard. Perhaps surprisingly, one approach early in the breeding season, is to carefully watch birds flying low over dead trees. If you pay close attention, you will sometimes see them stall and snap off the tip of a twig as they zip by – collecting material that they will use to build their nest (code CN).

The best way to confirm breeding, though, is probably to see birds repeatedly going in and out of a chimney, or other suitable nest site, during the day. This behavior is likely to indicate an occupied nest (code ON) with parents coming and going to feed their young. If you are lucky enough to have swifts using a chimney in your home, you might also hear young calling from their nest, in which case the NY code can be used.

Perhaps the best thing about chimney swift beer night is that – although it’s fun to be at the event with lots of other birders – it’s really not a problem if you miss the actual night. The swifts are around all summer, and can be seen funneling into the chimney roosts around dusk whenever the weather is good.  On the other hand, the Flying Cigar Ale – one of the best craft beers, a certain British beer snob has drunk this side of the Atlantic – is only available until the batch brewed for the event run outs, after which you will have to drink something else until next year.

For more information on breeding codes for this tricky species, check out this advice provided for atlasers in Wisconsin. And, of course, the Birds of North America account for the species is full of detailed information (though the full account is behind a paywall).