Now that we are well into the breeding season, a major focus of atlas field work should be to try to confirm breeding for as many species as possible.  In terms of the atlas, “confirmation” requires observing nests or behaviors linked to the confirmed breeding codes described on the atlas web page here. Most birds are breeding right now, which means that there are nests everywhere, and birds are exhibiting these behaviors all the time. Nonetheless, observing these things can be hard, especially if you are not used to looking for them. So, here are some tips on how to see the things that let you confirm breeding.

1. Slow down. As COA past president, Steve Broker, has pointed out several times (e.g., see this post from the ctbirds listserv last summer), key to the art of atlasing is to bird more slowly than you might at other times. In much of our birding, many of us try to see as many species as possible, which means constantly moving on to the next thing. Atlasing often requires the exact opposite – moving slowly, and taking the time to see what each bird is doing.

2. Watch individuals. Moving slowly can mean different things. Most important is to watch individuals, often for some time, paying close attention to their behavior. If you do this, you will start to see things that tell you more about their breeding status. You might even find that they lead you to a nest, and quite likely you will come to see into their lives in a new way.

3. Stand still. Another aspect of moving slowly is simply to not move at all. I frequently find that my most productive atlasing happens when I pick a likely spot with a good view and just watch to see what happens. A good spot might be the edge of a pond, or a hillside above a marsh, the edge of a powercut, or a clearing in the woods. Usually, I can rack up 15-20 species in as many minutes, and by just standing still and watching carefully I start to see birds going about their business without regard to my presence – and that is when they start visiting their nests or collecting food for their young.

4. Follow the quiet birds (and don’t be distracted by the loud ones). It’s a truism that we often hear birds before we see them, especially in forests or shrubby habitats. And an experienced birder can compile a long list of species just using their ears. For atlasing though, the most vocal birds are generally not going to be the ones that confirm breeding. Birds that are building nests or attending young rarely draw attention to themselves by making noise. Consequently, it is the quiet individuals – the small movements that you see out of the corner of your eye – that are often most worth following up on. Nearly all of the nests I find are because I see a bird moving unobtrusively through the vegetation and I wait to see where it is going. Often, nothing comes of it, but I’m always surprised at how often something does.

5. Look at bills. Two of the easiest ways to confirm breeding are to see birds carrying nest material (code CN) or food for young (CF). The latter code should not be used for some species (crows, jays, ravens, hawks, terns, cuckoos, kingfishers), which often carry food for some distances before eating it themselves. For most other species, though, an adult hopping from perch to perch, or repeatedly going back to a spot with food in its bill is almost certainly provisioning its young – making CF a suitable breeding code.

It also pays to look very carefully. Especially when their young are small, the food items parents carry can be small too. So, any bill that looks just a little unusual is worth a careful look, as seen in this picture of a chickadee that I took in my yard this week: 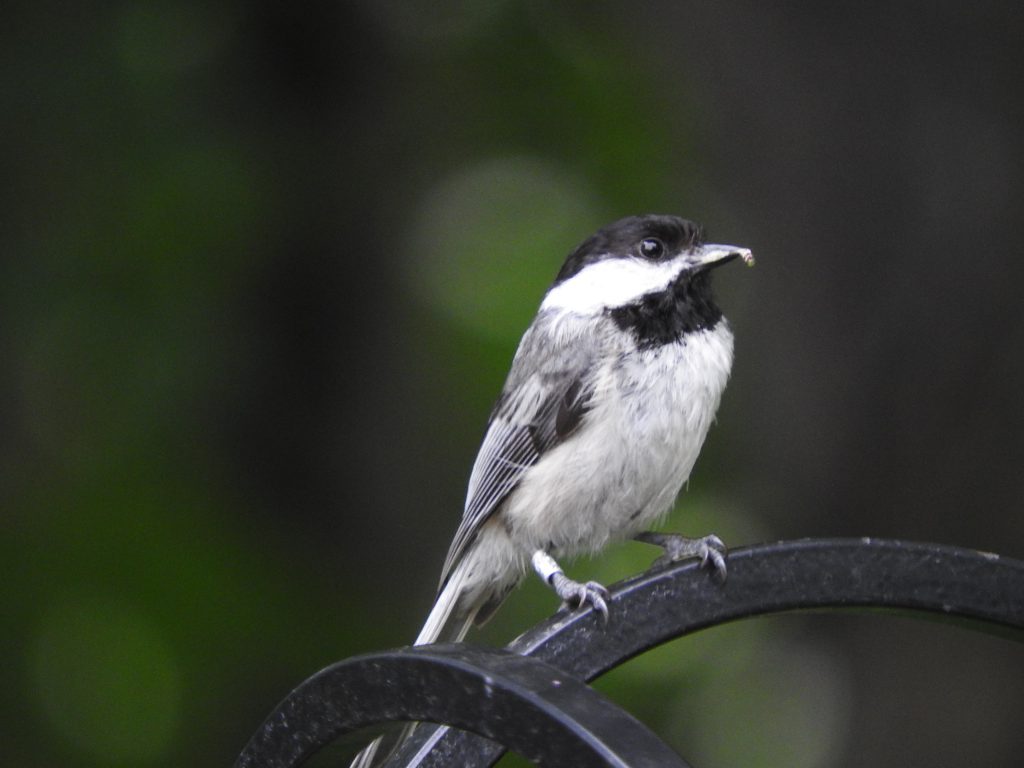 Black-capped chickadee photographed in Eagleville, CT, with a tiny food item that it subsequently fed to its young, which had hatched the previous day.

6. Look for odd plumages. Another common way to confirm breeding is to find frequently fledged young (FL). Like CF, this code needs to be used carefully. FL is designed for young that are still dependent on their parents, or sufficiently young that they likely hatched near-by. It should not be used for free-flying youngsters that could have come from a nest in a different block. Recognizing young birds is easy if they are with their parents, but can be tricky otherwise. Fledglings, however, often have distinctive plumages that they rapidly replace with adult-like feathers. Because they do not have this appearance for very long, many birders are not familiar with the subtle differences. If you see a bird that you recognize, but it looks a bit strange, check to see if it might be a juvenile bird just out of the nest. For example, I photographed this young mockingbird on Sunday – although it looks superficially like an adult, careful examination reveals yellow at the base of the bill and a streaky breast:

Young northern mockingbird photographed at Haley Farm, Groton, CT. Notice the streaky breast that distingushes it from an adult (but is consistent with the fact that mockingbirds are a kind of thrasher).

7. Listen for strange noises. If you hear strange noises – especially high pitched twittering or squeaking – then there is a good chance that there are baby birds nearby. They might have fledged and be hiding in the vegetation, or they might be in a nest. Rather than trying to find the young themselves, watch carefully for adults, which will be somewhere nearby. If you are close to the twittering, you might want to back off a little. With luck, the adults will come in, allowing you to check whether they are carrying food, and perhaps see where the young or the nest is. If you are certain there is a nest, and can hear the young in it, then you can use the NY breeding code without needing to get any closer.

8. Constant vigilance. My last tip is simply to be on the look out for signs of confirmed breeding at all times. Once you know what to look for, you will start to see birds carrying food or nest material frequently. Many of the birds I confirm are seen at times when I am not really atlasing – the phoebe nest under a friend’s deck, the catbird with a beak full of food seen while I’m walking to my office, the rough-winged swallow going in and out of holes in the building next to Starbucks. They all count, though, and we need every report we can get.