Several bird groups have now run block busting trips to help fill gaps in atlas coverage. Block busting does not have to be done in organized groups though. This weekend, for example, Margaret Rubega and I had some time to kill in western Connecticut, so we spent a few hours searching under-surveyed blocks in the Danbury area. We focused on block 76D, but also spent some time in adjacent blocks, adding species in half a dozen blocks.

If you are searching for a good site to explore, where you can be certain to contribute importantly to the atlas, here are the steps to take: 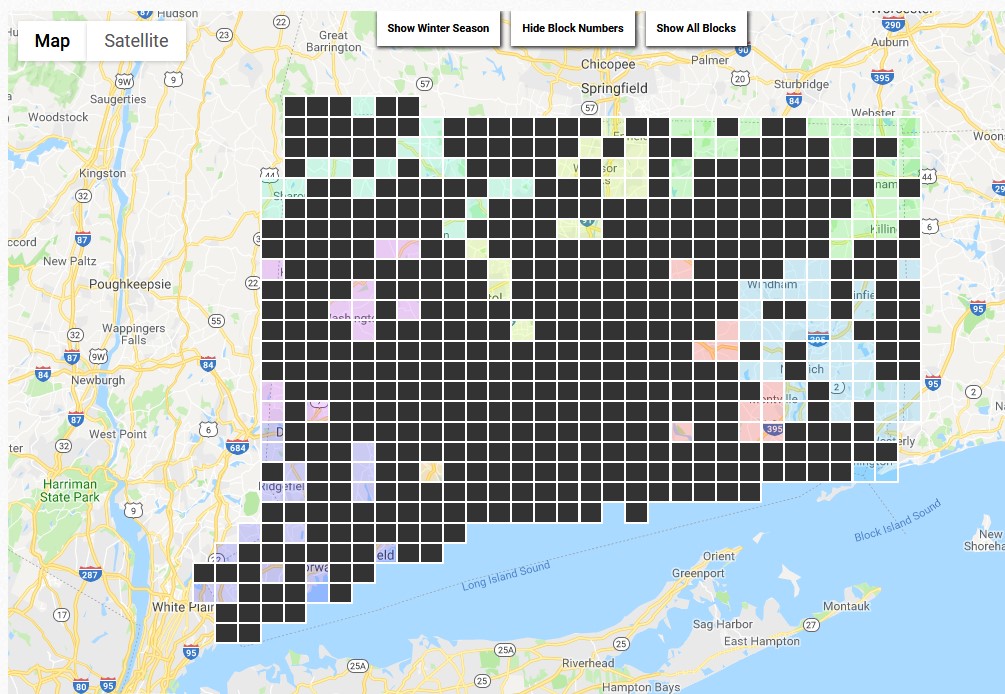 Map of atlas blocks with those that have a block “leader” turned black to reveal those most likely to need block-busting efforts. Clicking on open blocks in the Danbury area last week quickly revealed which most required block-busting effort.  For example, with over 40 hours of survey work, 75B clearly doesn’t require much additional work, despite being open.  Block 76D, by contrast, was a perfect target for block busting.

If all blocks in your target area have a fair number of species detected, then look for one with less than 5 confirmed species – the next few weeks are perfect for confirming breeding and adding to this list is just as important as adding species.

Because new data are coming in every day, it is a little tricky to give a simple list of sites that need work, because it could quickly become obsolete. But we have developed a site that identifies blocks that are both open and that have fewer than 6 species reported.  These are the prime targets for block-busting. Click here to view the list and click on the word “Map” at the top to see where they lie in the state.

For each block we also give the number of species detected in the block during the 1980s atlas – to give you a rough sense of how many species could potentially be found in the area.  This site will update whenever the preliminary species lists on the block map update, so recheck it each time you decide to go block busting. Map of priority sites for block-busting – open blocks are those that have no lead observer and fewer than 6 species recorded as of 30 June 2019 (note that records submitted on paper forms in 2019 are not accounted for). To see an updated map and a list with more block details, click here.