I took a slow hike in the snow to the summit of Mt Tom on one of the coldest mornings this winter. I was covering one mile an hour on a trail that was crisscrossed with deer, possum, and mouse tracks. I did not have the time to investigate them. I passed by a wet area that will probably become a vernal pool in a few months, but I did not stop to think about singing wood frogs, I had no time. ;Once at the top I heard high-pitched musical notes and ‘hank, hank, hank’ calls. Now I stopped. I started to tally all the birds I could see and hear; White-breasted Nuthatch, Brown Creeper, Tufted Titmouse, Blue Jay and a Pileated Woodpecker. I recorded everything in my eBird app that I would later share with the CT Bird Atlas.

I was performing a one-hour timed survey for the CT Bird Atlas Winter protocol. Sixty minutes goes by so quickly leaving little time to contemplate mammals and amphibians. From the 1,325-foot summit of Mt Tom I looked out over Morris, Litchfield and Washington, Connecticut. Below me other block- busting teams from the New Haven Bird Club were slowly moving through the winter landscape of forest and fields, frozen pond shorelines and cold riverbanks at the same 1 to 1.5 mph pace tallying the birds. That morning we would tally Cedar Waxwings, Eastern Bluebirds, Eastern Meadowlarks, Coopers Hawk’s and Red-tails.

Two days before, Members of the NHBC were bock-busting in the Pachaug State Forest and adjacent areas. Many of the NHBC birders had mentioned that they would never have considered birding these areas that are unknown to them and are thankful for the opportunity to discover new areas. So, what is it about these areas in New London and Litchfield Counties that would draw birders out of the New Haven Area? Simply, the members were happy to support the CT Bird Atlas now in its second of three years. These winter blocks have not been adopted by volunteers, or they have received very little or no coverage. Coverage of a block could be completed by a group of volunteers breaking up into teams in a group effort over a short period of time; such an event is called block-busting.

This past June, the NHBC conducted a block-busting event in the Pachaug State Forest area for the breeding season portion of the atlas, fulfilling the minimum 20-hour survey requirement. Now we returned to fulfill the 10-hour minimum in early winter and we will return in either January or February for the 10 hours of late winter surveys needed to complete the block.

Ideally, a volunteer would adopt a block and ensure that they will log in 20 hours of survey time in the breeding season and 20 hours in the winter. The winter season is divided into early winter (November to December) and late winter (January and February) each requiring 10 hours. The basic protocol for the winter is to conduct one-hour surveys in ten sites that represent all the habitat types in the block. Ideally, the same sites should be used for both early and late winter surveys. However, 21% of all winter blocks throughout the state have not been adopted (see map below). Furthermore, 34% of all the blocks have not had any winter surveys conducted. The winter atlas effort clearly needs more support from the block volunteers and the birding organizations to meet the coverage goals.

In addition to adopting a block, volunteers can support the winter atlas by conducting specialized surveys of (a) inland lakes and ponds, (b) coastal shorelines, major rivers, and large lakes, and (c) nocturnal and high tide roosts. 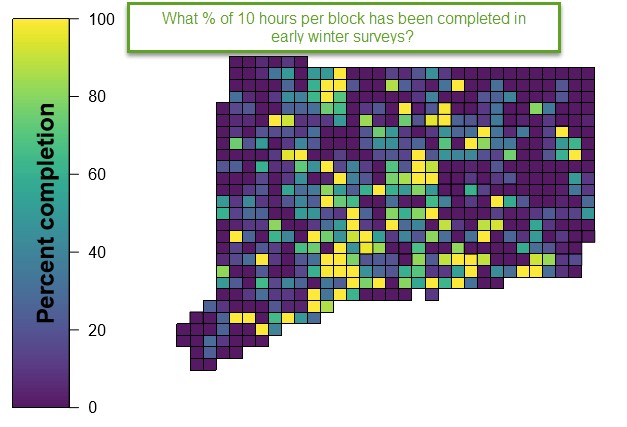 As I was moving to my next site for a one-hour survey, five Common Mergansers flew overhead. I was happy to see some ducks. The frozen water assured us that no waterfowl were to be expected. However, I could not count these birds as there was no way to ensure that they took off from or would land within the block. A couple of days earlier we had open water after lunch with Canada Geese, Mallards, Green-winged Teal, American Black Ducks, Bufflehead and Greater White-fronted Geese. We got together for lunch to warm up, re-organize ourselves, swap stories and to play the game of understated one-upmanship. (“…in this field we didn’t get much except some great looks at Eastern Meadowlarks”).

At the end of each day we were cold, tired and content. All totaled we had 13 participants 9 teams, 43 survey hours. We completed 4.3 Early Winter Blocks and covered approximately 6.5 miles. We are looking forward to our next trips in January or February. 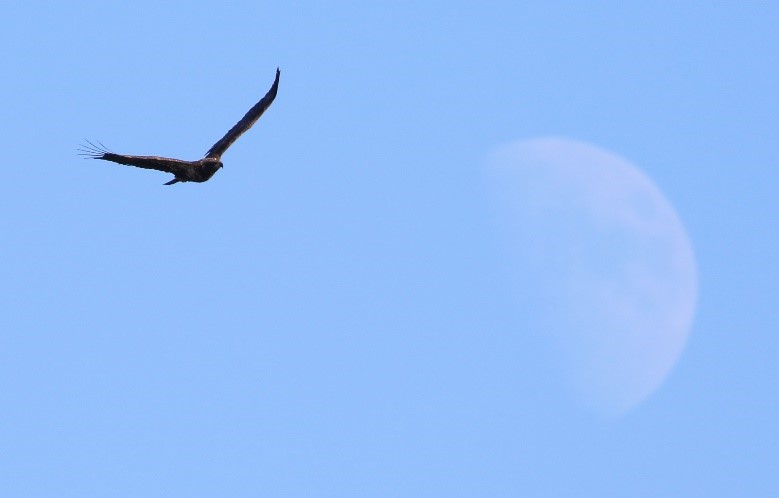 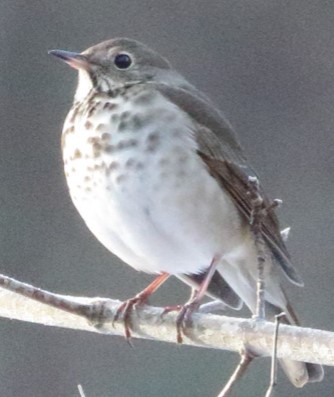