It’s hard to believe but there are only six weeks of winter atlas field work left, so it’s a good time to get out survey blocks.  This week, we updated the block map data on the atlas web site, so species lists should be relatively complete (with the caveat that not all data submitted by mail has been entered yet).

A quick look at the block completion statistics show two main things.  First, as with the breeding atlas, we have much better coverage near the coast, and in the center of the state.  This largely reflects the distribution of people in the state, but even parts of Fairfield County are sparsely surveyed. 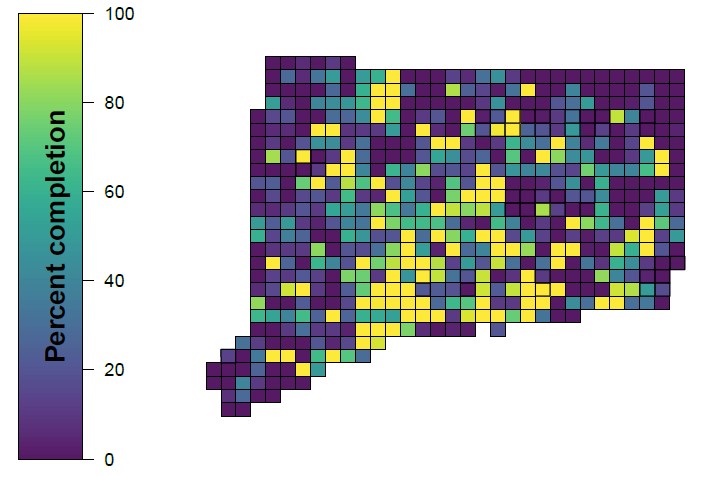 Map showing preliminary data on the completion level for atlas blocks during the early winter (Nov-Dec) period, after two complete survey seasons. Blocks are considered 100% complete when there has been 10 hours of survey work within their borders.

The second pattern that jumps out is that we have many fewer completed blocks in the late winter (Jan-Feb) period.  This is partly because we have not completed a second season of field work for this time period, but that is only part of the story because the difference existed at the end of last winter’s field work too. 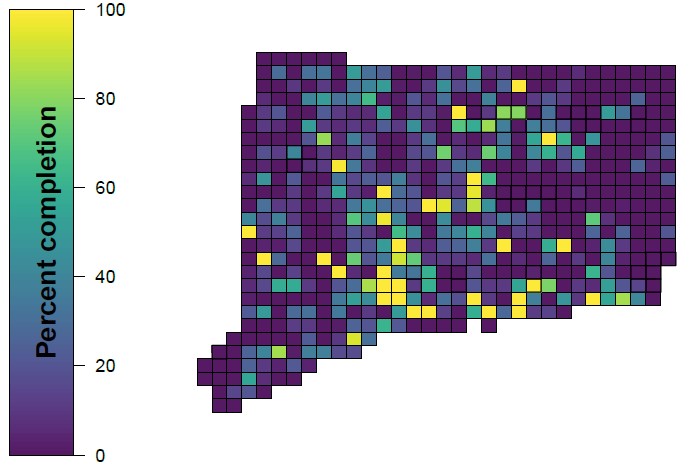 Clearly, the cold weather can be a deterrent, and the birding can be quieter than at other times of year. But, my experience is that I see something neat every time I go out – a regular but uncommon bird like a winter wren or hermit thrush.  Or, a bird unexpected at this time of year, like the belted kingfisher I heard at the pond near my dentist’s office last week.  Or, even a true rarity like the yellow-headed blackbird on Horsebarn Hill at UConn on Thursday (though, I didn’t find that one!).

Remarkably, there are even a few reports of early nesting.  For some owls and eagles this is to be expected, but on warmer days recently I’ve seen red-tailed hawks acting like pairs, and we just received our first report of red-taileds nest building for the year.  Although this is a nice reminder that breeding is just around the corner, it’s also a sign that we really need to get more winter surveys completed, especially in the parts of the state that are blue on the maps above.  New Haven Bird Club will be block busting in the Pachaug area later in the month, and in Litchfield in February (contact Craig Repasz for details).  If others are interested in block busting, let us know and we can identify good blocks to target.