Recently I was asked if we’d written a blog post on hummingbirds and had to answer “no”. Ever since, I’ve been thinking about what there is to say on how to confirm breeding for the state’s smallest nesters, as it can be surprisingly difficult (though not as bad as for the closely-related chimney swift).

Finding a nest is not impossible, as illustrated by this photo that atlas regional coordinator, Steve Morytko, included in an eBird report this week: 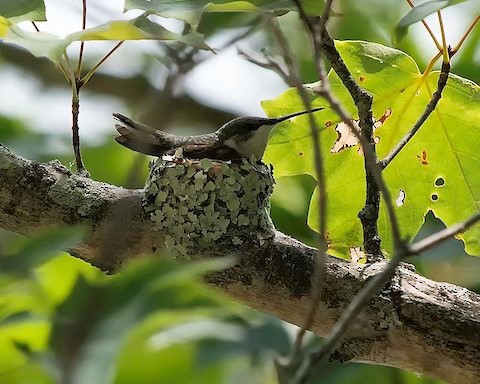 Nests, however, are as tiny as the birds, and are often placed on a tree branch high above the ground … and we’re not all as lucky (or as observant) as Steve.

Finding hummingbirds in suitable breeding habitat (code H) to indicate possible breeding is often straightforward. If you live in the block, regularly maintaining a feeder often works of course.  Or, walking through a park (or suburban neighborhood), with good plantings of flowers. Or, in more natural settings, keeping an ear open for their distinctive calls anytime you find an opening in the woods – especially if there’s a stream and lots of flowering shrubs.

Getting to “probable” is made harder by the fact that hummingbirds don’t form pairs (can’t use P), don’t really sing (can’t use M for multiple singing birds), are territorial over food resources more than breeding space (can’t really use T as it’s hard to know if chases are breeding-related), and don’t give obvious “agitated” chips like sparrows and warblers when a predator (or birder) gets too close to a nest (can’t use A).

On the other hand, hummingbirds do have very conspicuous courtship displays – male ruby-throateds will zoom back and forth in a deep U-shaped move, often rising high above the ground on each up-stroke. A female will usually be perched nearby, usually inconspicuous and out of sight. Last week, though, I was sitting in my yard working on my laptop and watched a female hovering a foot above the ground, about 8 feet away from me, while a male “shuttled” up and down in steep arcs in front of her.  Over the past few weeks, I’ve seen this display repeatedly in my garden, and several times while out birding atlas blocks.

Code C, then is likely to be the best way to report probable breeding in hummingbirds. For many of us, it may also be the best we can expect to do. Because adults don’t fly around with big piles of worms or caterpillars, carrying food for young (CF) and feeding young (FY) are hard to apply. Short of finding a nest, confirming breeding is likely to come down to seeing recently fledged young. Distinguishing hummingbirds just out of the nest from females, is tricky, but short bills, incompletely grown tail feathers, and subtle plumage differences can be good signs.

So far, the current atlas has found hummingbirds in a good number of blocks across the state.  The big blank spot centered on Hartford, matches the 1980s atlas results. Elsewhere, we have fewer records from northwestern Connecticut than in the past, but more from eastern. Whether this means anything more than the vagaries of survey effort is unclear at this point, but it is consistent with other data that suggest that ruby-throated hummingbirds are doing well throughout the eastern US. 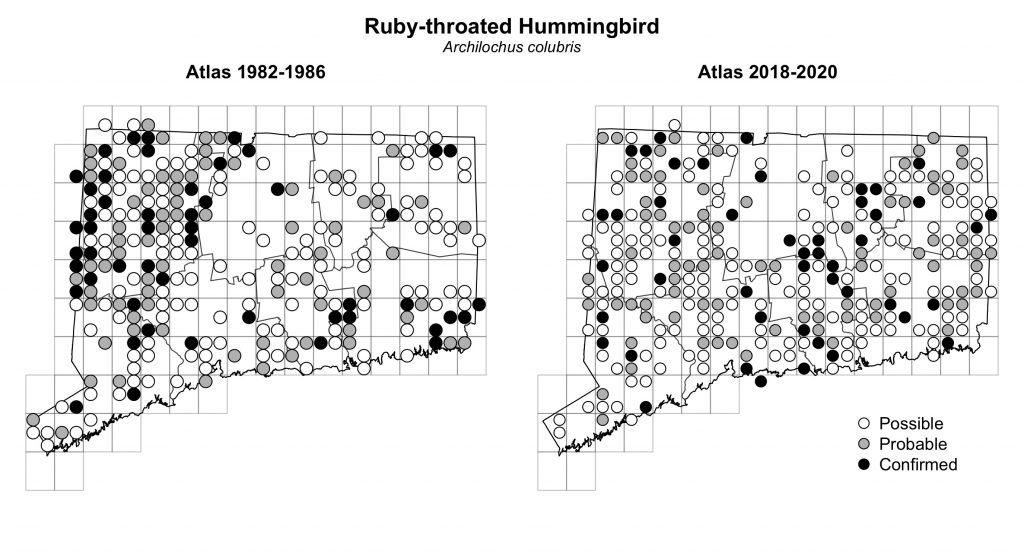 Breeding atlas reports of ruby-throated hummingbirds in Connecticut during the 1980s (left) and between 2018 and June 2020 (right). All data are preliminary and will be subject to review.