In the last couple of weeks, we’ve received several emails from people who have completed the target hours in their blocks, and are trying to decide where their efforts can now most benefit the atlas. Although we have general priorities, there are enough blocks that need work that we don’t have a simple prioritized list. Nonetheless, there are simple strategies that everyone can use to make a decision about where they can help the most.

The first step is to go to the interactive block map on the atlas web site (see the orange link on the drop-down menu in the image below).  From here you can find out which blocks still lack a lead observer, how much effort has been put into surveying the block, and what species are already in the database*.

When you first open the block map, you will be on the breeding season version, but you can switch to the winter version by clicking the button at the top that says “Show Winter Season”.

Then click the button that says “Show Closed Blocks”. Many of the blocks will turn black – those that do not still lack a lead observer. If you click on these, you will find some have still received a lot of attention – for example block 110B in Milford has no lead, but is nonetheless 100% complete for the early winter. If you look around, though, you will soon find open blocks that are far from complete. These are the best places to target.

In the image of northeast Connecticut, below, you can see all the black squares that indicate blocks that have already been taken by someone. Block 43E is open though, and by clicking on the corresponding square, the “pop-up” box that shows basic block statistics will appear*. This box shows that the block has received only one hour of survey work in early winter, and none at all in late winter (the one late winter species will be an incidental record, which is why no time is recorded). 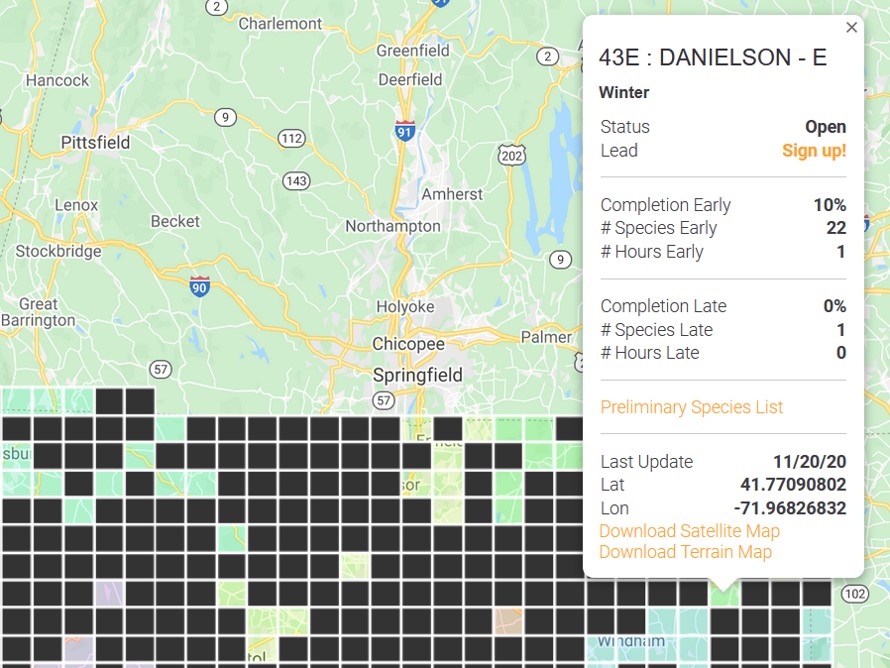 If you live in one of the more populated parts of the state there may be few open blocks nearby. In that case, another strategy is simply to start clicking on blocks until you find one with low completion statistics or few species records, and just go there. Even though the block has a lead observer, your visit will help get it closer to completion.

A third strategy is a bit more time consuming, but can help fill gaps. If all the blocks nearby are complete, and you are unable to travel farther afield, then look at the preliminary species lists on the block pop-ups (click the orange link) and see if there are obvious missing species. For example, recently, I was on the coast. Before I left, I checked the species list for the block I was in and noticed that few waterbirds were listed. So, I found a spot where I could spend 20 minutes scanning the ocean and quickly added about a dozen species.

My last tip is simply to explain how I employ these methods to plan my own birding. If I know I have only an hour or two, I will click on all the blocks in a circle around my home , and then go visit whichever has the least hours recorded or the fewest species. If I have more time, I will look farther afield and find somewhere with a pair of unsurveyed blocks next to each other. Then I’ll try to spend at least a couple of hours in each to ensure that we, at least, have some data for those blocks.

*It’s important to know that the map does not update instantly when new records are submitted, and that updates are slower for records not submitted via email. The map does, however, provide an accurate, “near-real-time” record for most blocks, and all reports will be added as time allows.