Although it is too soon to begin surveying atlas blocks in earnest, a few species have begun to nest and atlas data have started to flow in.  For example, last weekend I saw a common raven fly across the Merritt Parkway in Orange (block 94F) with a stick in its beak – carrying nest material (atlas code CN).  I was a little surprised about the location, but I checked with local birder Frank Gallo who confirmed that there is pair that nests on a cell tower nearby.

A week earlier, Steve Broker (COA president and regional atlas coordinator for the New Haven area) went one better.  Not only did he confirm that ravens are breeding in his block, but he found the nest and took some great pictures showing the adults allopreening – behavior that suggests that the birds were a pair – and that the nest contained eggs.  Steve’s pictures are show here (with his permission): 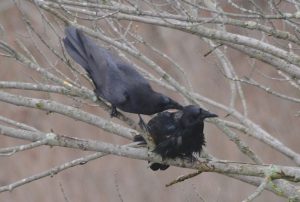 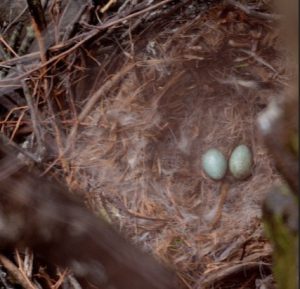 With this collection of evidence Steve could use atlas codes P (for a pair), maybe C (for courtship behavior, although ravens will allopreen birds they are not paired with), or NE (for nest with eggs). We only need people to record the strongest piece of evidence observed on a given day, though, so the correct code to use was NE.

For the atlas project, we do not need people to submit photographs. In fact, there is not even any need to find the birds’ nest – my flying raven carrying nest material was sufficient to confirm breeding.  If, however, you have photos that were taken from a respectful distance to ensure that the birds were not disturbed, (see the bird photographers’ code of ethics here) they can provide additional documentary evidence.

Other species that are beginning to nest already include bald eagles, red-tailed and red-shouldered hawks, and some owls. If you have strong evidence of nesting for any of these species, anywhere in the state, please submit your data as an incidental observation.

For more pictures from Steve’s raven observations, check out his eBird checklist here.