This week the breeding activity has continued to pick up. Daily, I’ve been watching a song sparrow taking repeated beak-fulls of dead grass into a low, sprawling conifer in my yard, where it is clearly building a nest.  Yesterday, I watched an American crow climbing around in a maple pulling on twigs, trying to break one off, presumably for use as nest material.  And, this morning I watched a male red-bellied woodpecker calling repeatedly from a hole I’ve seen it roosting in at night over the past couple of weeks. At one point a female flew in and inspected the hole, which the male disappeared inside, before the female flew off a few minutes later.

Curious as to whether I should consider this an occupied nest (breeding code ON), or if it is a roost hole that I should classify only as a probable nest (code N) for now, I looked up some information on nest site selection in the Birds of North America account for this species (authored by CE Shackelford, RE Brown, and RN Conner). I was very pleased to find an almost exact description of what I had just observed:

“… the male woodpecker attempts to attract mate to his roost cavity or a partially completed excavation by means of kwirr calls, drumming, and relatively soft taps at a rate of 3/s (mutual tapping) while perched inside the cavity, or while perched on the outside of the potential nest tree facing a partially excavated cavity. When attracted, the female flies to the male and perches beside him, joining him in nearly synchronous mutual tapping behavior (Kilham 1958a)”

(Even though I know that animal behaviours are often well-known and well-described in the literature, it always amazes me when birds do just what the books say they should do!)

This account convinced me that I should use the more conservative breeding code, N, at least until I can satisfy myself that the female is consistently using the hole, and that it is not just the roost site of a hopeful male. 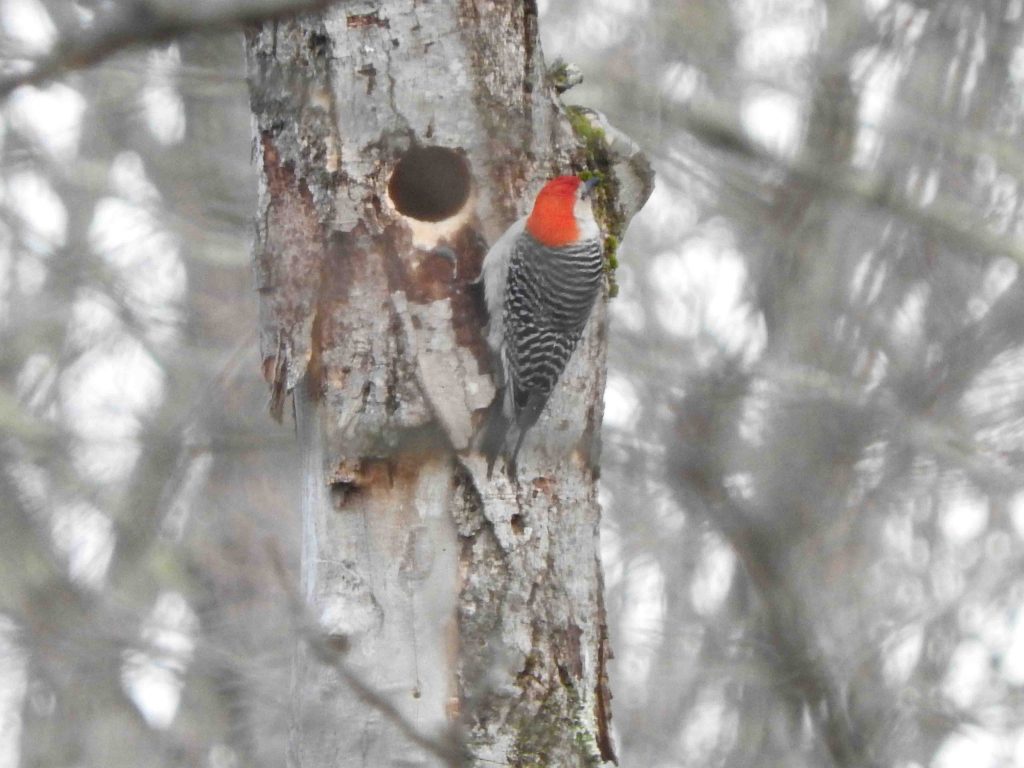 This male red-bellied woodpecker was going in and out of its roost hole, calling repeatedly.  At one point a female flew in and inspected the cavity.  When she did, the male went into the hole and the two birds interacted for a few minutes before the female flew off.