With the end of the year comes the end of Early Winter data collection for the atlas.  There’s still a little time, for owls at least, but now it’s just a matter of sharing any lingering eBird checklists or mailing in data forms so that we can wrap things up for that, penultimate, portion of the project.

Two months ago, we still had lots of gaping holes in our attempt to get a decent number of surveys in every block. Thanks to the great efforts of many people, and the truly exceptional efforts of a distinct few, we’ve managed to fill most of those gaps and will end the atlas with a impressive statewide sampling of Connecticut’s early winter birds.

Now, we need to do the same for the late winter. END_OF_DOCUMENT_TOKEN_TO_BE_REPLACED

(Note, this post repeats information recently published in the COA Bulletin, but the maps have been updated.)

As year’s end approaches, we are almost half-way through the final winter of data collection for the Connecticut Bird Atlas. This means that there are only two more weeks in which to add data for the early winter period. Coverage for this period has improved greatly, and many blocks have now reached the target of 10 survey hours between 1 November and 31 December: 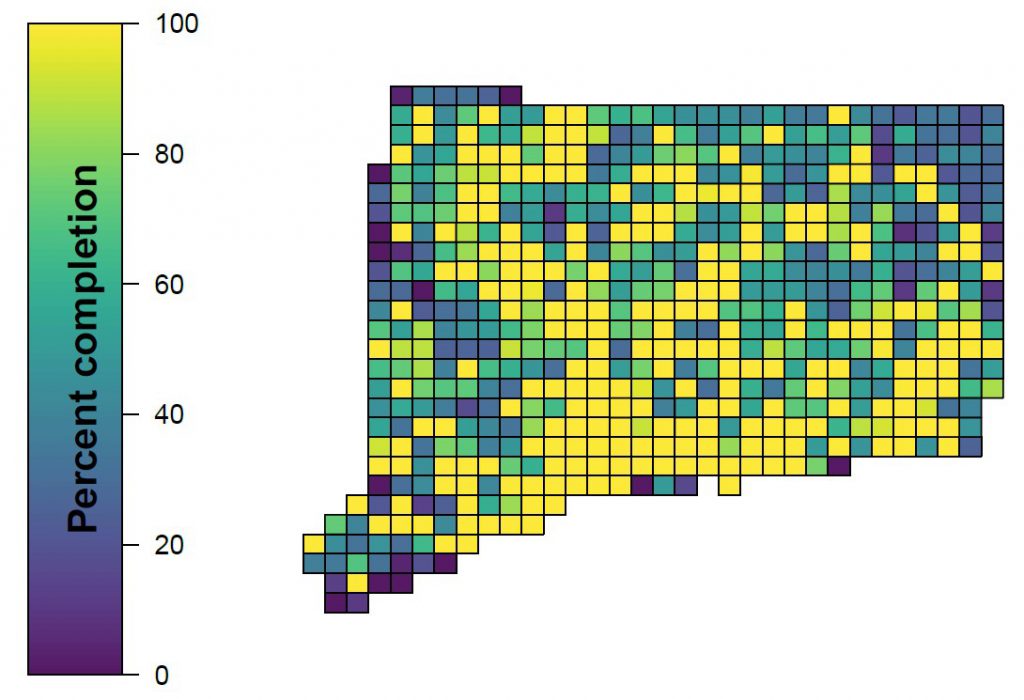 Survey coverage during the early winter period (Nov-Dec) for the Connecticut Bird Atlas. Blocks are considered complete once they have received 10 hours of survey effort.

There are still plenty of  blocks that are far from this target, however; especially in the northeastern corner of the state, central-western and far southwest Connecticut, and scattered places throughout the state’s interior. The highest priority blocks are those that have received less than 3 hours of surveys, with those with less than an hour (often zero) especially likely to benefit from even a short visit (click here for a larger version of the map): 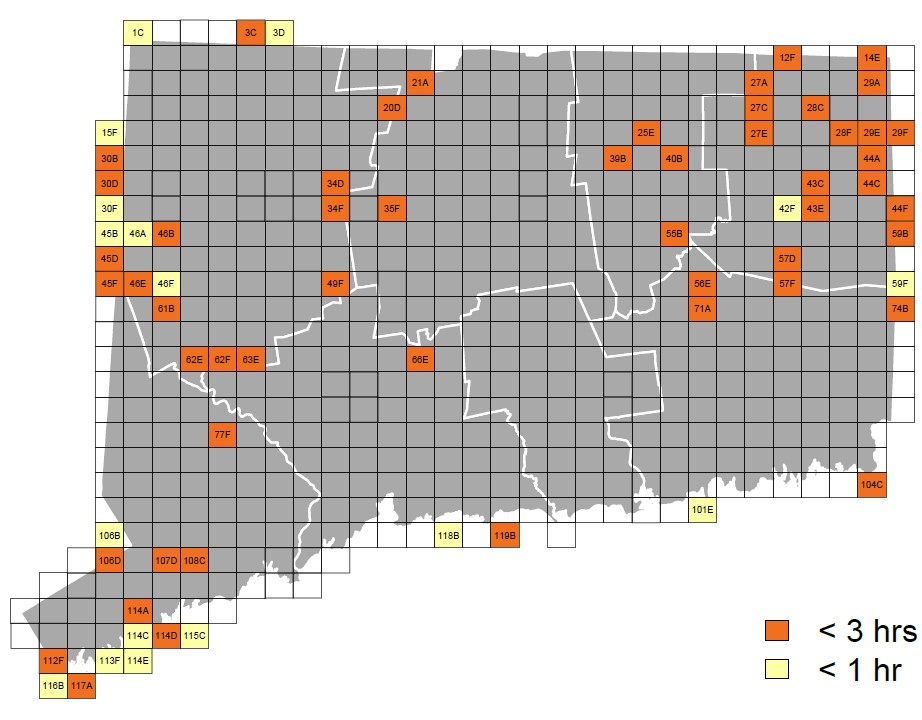 Blocks that have received less than 3 hours of surveying during the early winter period (Nov-Dec) are the highest priority for visits before the new year.

With Christmas Counts and the holidays about to begin (and lapwings and grey geese to chase), it’s a busy time, but if you can spare a few hours to visit one of these high priority blocks, it will really help us wrap up the early winter work.

In recent posts we’ve emphasized blocks with especially few hours, or especially few confirmed species, as our highest priorities for additional atlas visits. As a result, we’ve made great inroads in some of the blocks where data were most lacking. With a month or less remaining to fill gaps for most species, we thought it would also be good to revisit the “big picture” and see how things look across all blocks. END_OF_DOCUMENT_TOKEN_TO_BE_REPLACED

A couple of weeks ago, we posted a map showing which atlas blocks were priorities in terms of the number of survey hours they had received. Since then, a number of people have made targeted efforts to visit those blocks and ensure we have data from all of them. Given how much things have changed, we now have an updated version of that map, which shows just how much progress has been made (full screen version here): END_OF_DOCUMENT_TOKEN_TO_BE_REPLACED

As we approach the end of June, we are mid-way through the final summer of data collection for the breeding portion of the atlas. July is the best month to confirm species, and breeding for many species lingers into August. Even in September a few species will still be breeding – goldfinches and cardinals for example. But, July is really the month for a big last push. END_OF_DOCUMENT_TOKEN_TO_BE_REPLACED

As 2021 is the last year of data collection for the breeding portion of the atlas project, our focus is very much on filling gaps – looking for species that have been missed and, especially, seeking evidence of confirmed breeding. At the start of the year I was shocked at how many blocks were missing some very common species. Several of the species that really stood out are associated with human habitation, and I wrote about house sparrows and rock pigeons earlier this year. END_OF_DOCUMENT_TOKEN_TO_BE_REPLACED

Warblers are well into their breeding season. For example, this morning in Eastford, I watched a female Blackburnian warbler gathering cobwebs and small twigs, while a male sang nearby. Nearby, I also saw both black-and-white and yellow warblers carrying food back to their nestlings. Most warblers, however, have fairly specific habitats, and are unlikely candidates for the list of species that could be found in any block. END_OF_DOCUMENT_TOKEN_TO_BE_REPLACED

In most posts this year, I’ve focused on species where we think we lack complete information, such as house finches and rock pigeons. But there are some species among the dozen that we feel could breed in any block that have already been found in almost all of them. END_OF_DOCUMENT_TOKEN_TO_BE_REPLACED

Back in July 2018 – midway through the project’s first breeding season, I identified 12 species to confirm in every block. Based on results from the first atlas, and my experience atlasing across the state, these 12 species seemed like they could be found pretty much anywhere. Whether that’s true is hard to say without ensuring that we have good coverage in every block. So, the next couple of months are the last chance to follow up and see if these species can be found in places they have not yet been reported from. END_OF_DOCUMENT_TOKEN_TO_BE_REPLACED