As 2021 is the last year of data collection for the breeding portion of the atlas project, our focus is very much on filling gaps – looking for species that have been missed and, especially, seeking evidence of confirmed breeding. At the start of the year I was shocked at how many blocks were missing some very common species. Several of the species that really stood out are associated with human habitation, and I wrote about house sparrows and rock pigeons earlier this year.

Having made attempts to find these species in blocks they were “missing” from, I’ve concluded that house sparrows are probably just under-reported, but that rock pigeons may have really experienced a decline (though they’re probably still under-reported). More recently, I’ve been focusing my attention on starlings, another introduced species.

Although starling doesn’t quite make the list of species expected in every block, it comes very close, at least based on data from the 1980s.  Starlings are known to have declined since then, but they’re generally still easy to find wherever there are people.  Consequently, I was surprised at how many blocks lacked reports: 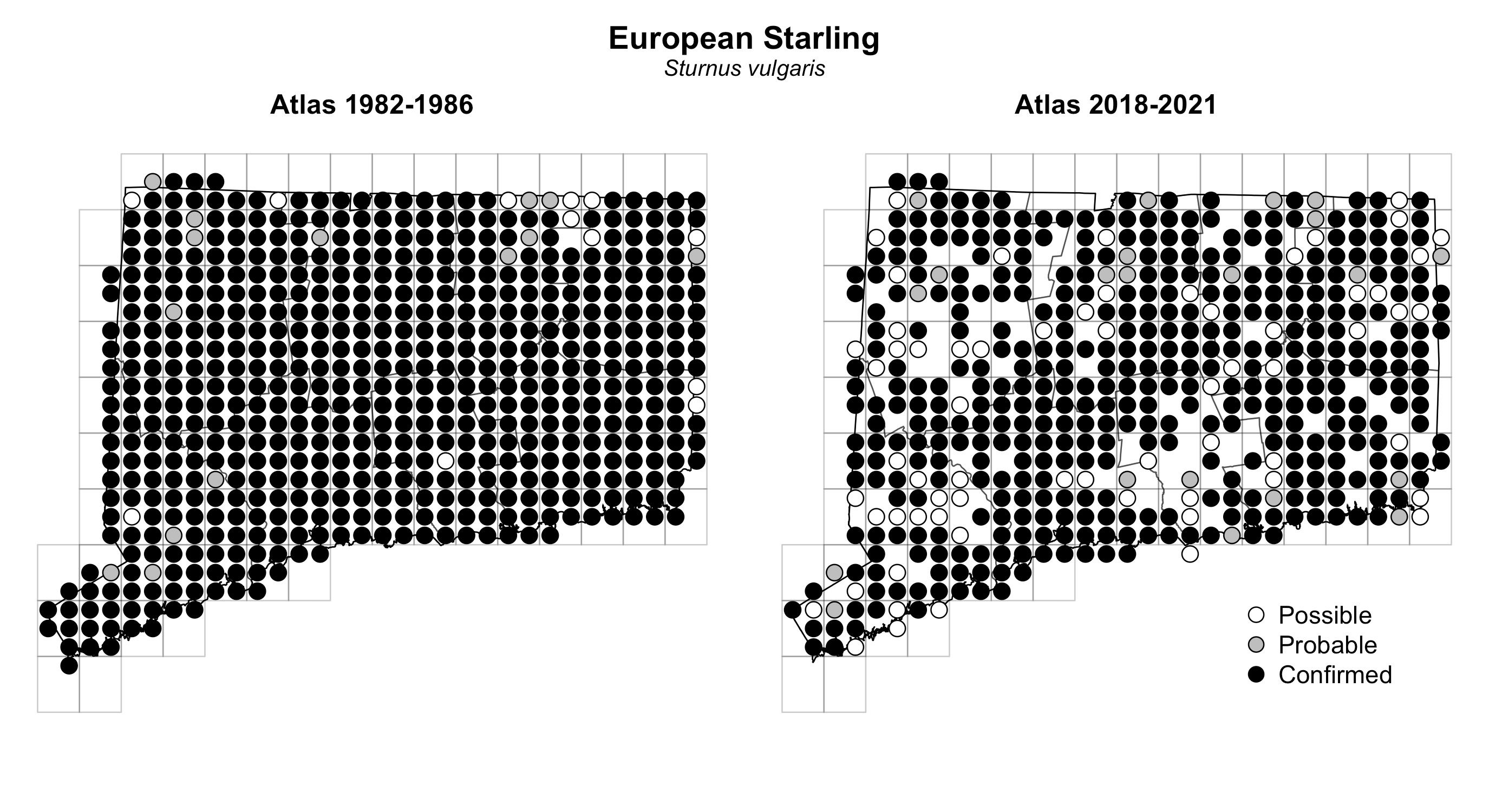 Breeding atlas reports of European starling in Connecticut during the 1980s (left) and between 2018 and June 2021 (right). All data are preliminary and will be subject to review; a few of the most recent reports may not yet be included in our maps.

Is the species really missing from large sections of Middlesex and Litchfield Counties? Are there really so many parts of Fairfield County where they can’t be confirmed?  Have they really declined as dramatically as the current atlas map suggests?

Without more data it is hard to be certain, but I suspect the answer to each of these questions is “no”. To back that notion up, I’ve spent time over the past month visiting most of the blocks in Windham and Tolland County that lacked confirmed starling records at the start of the May. In almost every case, I have been able to confirm nesting.  Usually it takes less than half an hour (often much less) and simply involves finding a farm, a strip mall, or a patch of suburban housing and waiting for a few minutes.  I usually add at least few other species associated with these habitats too – barn swallow, house finch, maybe killdeer.

At this point, we are outside the safe dates for starlings – because they are an early breeder, some birds are already flocking up and moving away from breeding areas. The only way to add the species to a block then, is by confirming breeding.  Plenty of starlings are still nesting though, and I was able to confirm the species in three blocks in less than an hour on Tuesday.  The easiest ways to confirm breeding in the species are to see an adult carrying food back to its young, to hear nestlings making a racket from a hole in a roof, or to see a couple of fledglings following an adult around looking for handouts. Young birds are tricky though, as unaccompanied fledglings that are independent of their parents do not confirm breeding since they might be far from the nest site (as evidenced by the large flocks forming in coastal and agricultural areas).

Although the breeding season goes through August for most species, the next couple of weeks are likely our best bet for filling some of those gaps for starlings. And for once, the biggest gaps in coverage do not appear to be in northeastern Connecticut.