Last week was widely noted to be one of the best for spring warbler migration in Connecticut for many years, and lots of birders took advantage of it to boost their year lists and to do big days. I, on the other hand, injured myself on the first morning and ended up laying on my back for most of the week (I did see 18 species of warblers and heard both cuckoos that first day … so some consolation). Yesterday, I was finally able to get back out in the field, but fearing a relapse I decided I shouldn’t push my luck.

As Steve Broker has pointed out, atlasing requires the art of slow birding – finding a bird, then patiently staying with it until its behavior reveals evidence of nesting – the complete antithesis of a big day. Taking Steve’s advice to heart, I headed to a local swamp where all I needed to do was walk a short distance along a road that cut across the wet area. My hope was to add Virginia rail for one of my blocks and see whatever else I could find.

Once I got there, however, I realized just how great small swamps are for atlas birding. The habitat is relatively open, making it easy to watch what birds are doing. In addition to being good for specialized wetland species, swamps are usually bordered by shrubland habitat, which in turn is surrounding by forest, putting a range of habitats in close proximity and facilitating a high species count. And, because many Connecticut swamps were created by beavers in formerly wooded areas, there are usually a lot of standing tree snags, which are ideal for cavity nesting birds like woodpeckers, bluebirds, and tree swallows.

As a result, by walking only a quarter of a mile, and spending little more than an hour, I was able to find over 30 species, confirming breeding for five, and observing some sort of breeding evidence for most of the others.  I observed eastern kingbirds going back and forth with beakful after beakful of cattail fluff as they built their nest (breeding code NB, see video here), watched common grackles building a nest on the other side of the road (NB again), and found tree swallows using a natural nest cavity (ON). I was also able to study a pair of very agitated hairy woodpeckers flying back and forth between trees,  with food in their beaks and calling constantly, before finally going to the hole I suspected they were using and confirming that it contained a brood of young (NY).

I also found a young orchard oriole (not especially common in this part of the state) singing away, and heard two yellow-billed cuckoos counter-singing from either side of the swamp.  Both of these species are still a few days shy of their safe dates, but I now know to come back and see if they are still around in a week or two.

As migration winds down, the breeding season is winding up.  Rather than seeking as many species as possible in one day, perhaps the atlasing big day should be to see who can confirm the most species in 24 hours.  That will require a slower place, and perhaps a good place to start might be your local swamp. 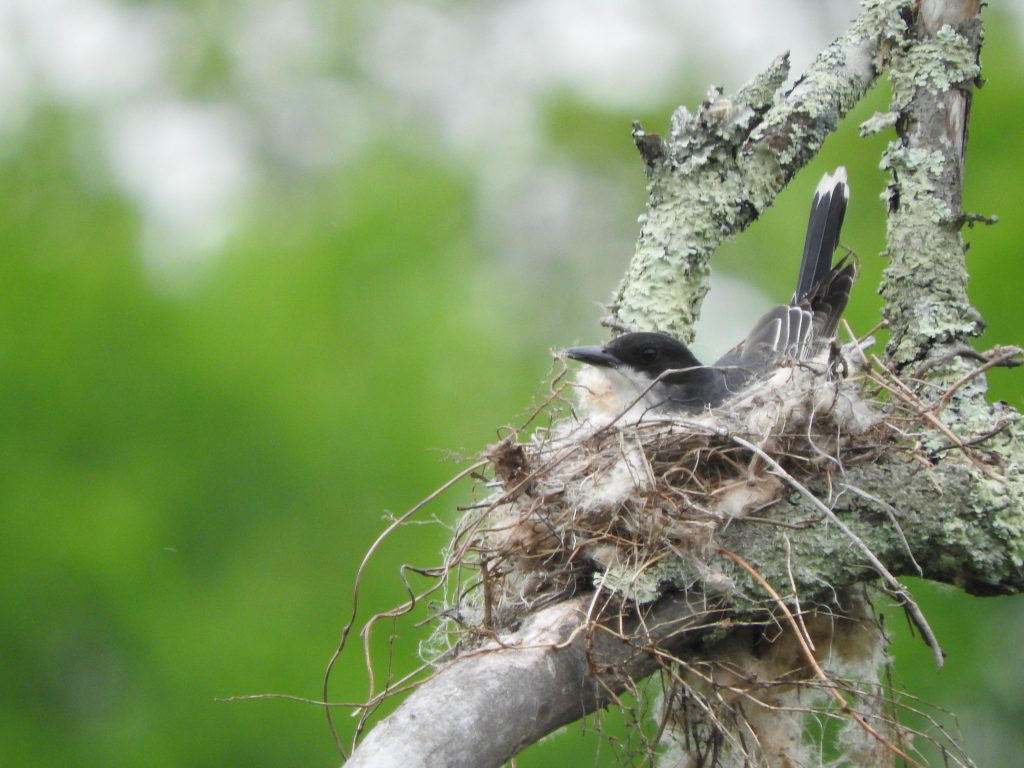 Eastern kingbird nest.  The bird was still building, but after bringing in each beakful of material it would sit down in the nest, pushing it’s body down, to help shape the nest cup.

For my complete eBird checklist go here. I never did find the rail.