Almost daily, I notice some bird doing something and think “I should write a blog post about that”.  And then my life (or my job) gets in the way and I don’t.  Luckily, if you just wait long enough (as when atlasing), the solution comes along.

This time, as is often the case, it is in the form of a Greg Hanisek post on ctbirds, in which he describes one of the best ways to confirm breeding in crows. All that’s left for me to do is to encourage everyone to read it, to issue two related warnings, and to post current versions of the data maps.

First, the warnings.  As Greg describes, the FL code is probably the best way to confirm crows.  But, be aware that crows move around quite a lot, so it’s especially important to be sure to heed the “recently” part of “recently fledged young”.  Birds that are in family groups, being fed by adults, that fly weakly, etc., are all fair game for the FL code.  But a strongly flying, independent youngster may be from a different block and should be coded only as possible evidence of breeding (code H).

The second warning is a perennial one, and is part of why crows are so hard to confirm. For most species, seeing adults carrying food around is a good sign of a nest, or young chicks nearby.  Some species, though, make extended flights carrying food that they intend to eat themselves – for these species the CF code should not be used. Such species include all corvids (crows, jays, ravens), raptors, kingfishers, and cuckoos.  In these species, one really needs to see the food taken to the young to be sure that it confirms breeding – and if that happens either the FY or NY code can be used.

Now for the maps, which clearly show the reason to take heed of Greg’s advice: 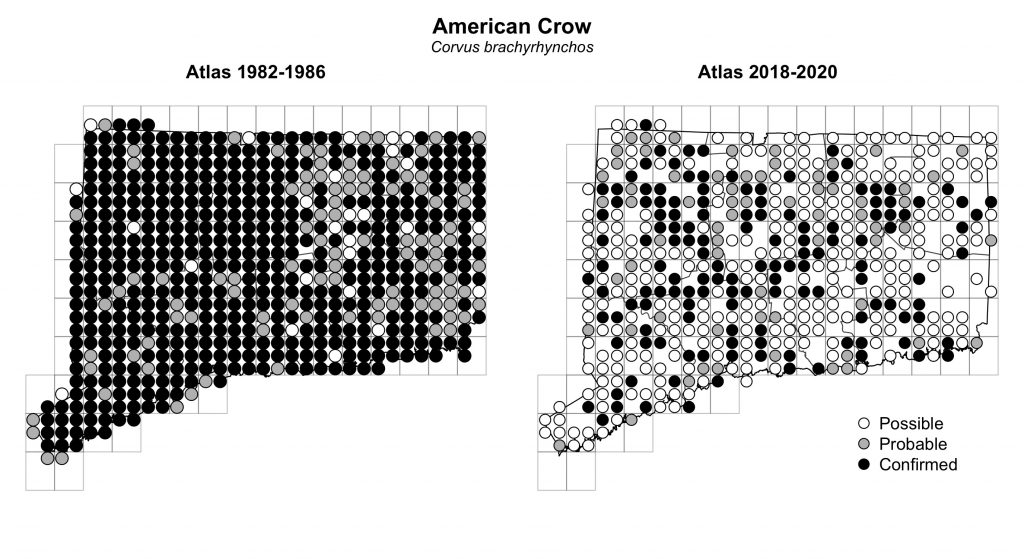 Breeding atlas reports of American crows in Connecticut during the 1980s (left) and preliminary data from 2018-2020 (right).

The map for fish crow also shows the northward spread of the species, especially in more urban areas and along major rivers. This spread reinforces the need to also be careful about crow identifications, focusing on vocalizations, and recognizing that young American crows can sometimes sound like fish crows. 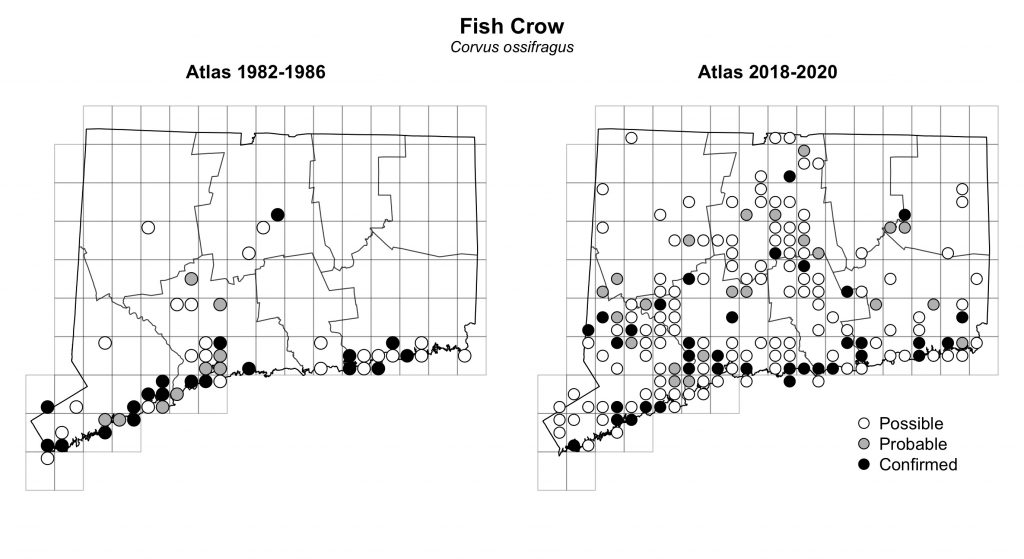 Breeding atlas reports of fish crows in Connecticut during the 1980s (left) and preliminary data from 2018-2020 (right).