As is often the case, discussion on the CTbirds listserv, starting with a post by Preston Lust, led me to take a look at the preliminary atlas species maps this morning.  This time, the subject was waterthrushes. 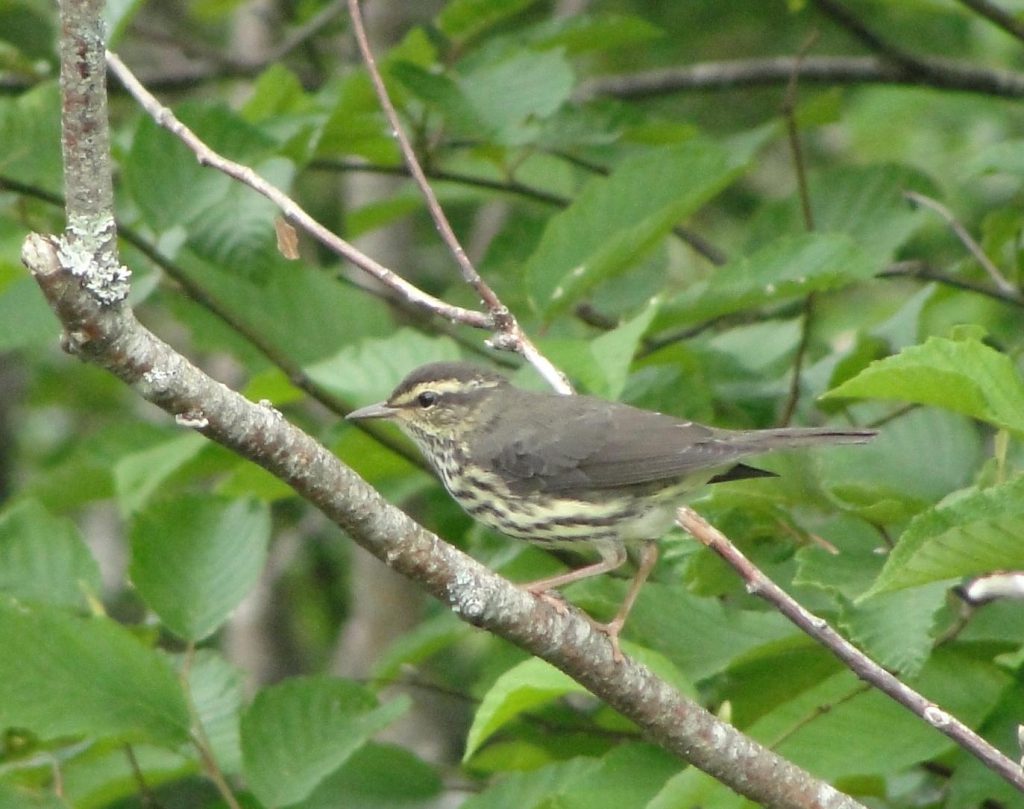 These two warblers, especially Louisiana waterthrush, are relatively early breeders, and could be starting to migrate already. That is why the “safe date” period for Louisiana ended yesterday, and that for northern ends this weekend. After the safe date period is over, observations that confirm breeding will still be used for the breeding atlas, but other records will not because of the possibility that the birds involved are migrants (i.e., it will no longer be “safe” to assume that they are local breeders, unless there is evidence to confirm local breeding).

As others have noted in the listserv thread, finding a waterthrush nest is not easy. Earlier this year I found my first, when a bird I was watching feed along the edge of the water hopped up into a hollow in an overhanging piece of riverbank. If look closely (really closely), you should be able to find it in this terrible photo I took from across the river: 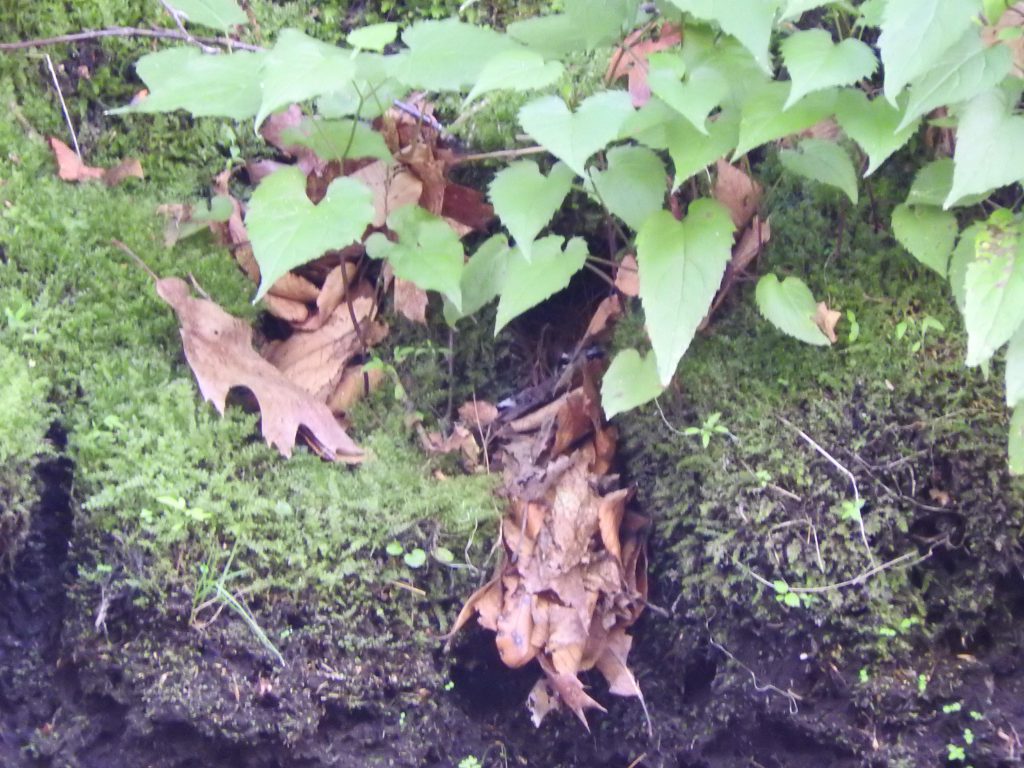 That said, in the last week, I’ve confirmed breeding for both species, in different blocks. In each case, confirmation came by finding recently fledged birds (code FL) interacting closely with adults, clearly suggesting that they were family groups. This last point is important, as it suggests that they were truly hatched nearby and not wanderers from some other block. Older “hatch-year” birds should not be coded as FL, as they do not confirm breeding at the site where they were observed (H would be appropriate instead, if they are in suitable nesting habitat for the species).

The maps that we currently have were made in June, so they don’t reflect all of the data added in the past month, but they do give a clear sense of the different breeding distributions of the two species in Connecticut. Louisiana waterthrush is more widespread and can be found across much of the state, although it is more likely to be absent from more built-up areas along the coast and in the Connecticut River valley: 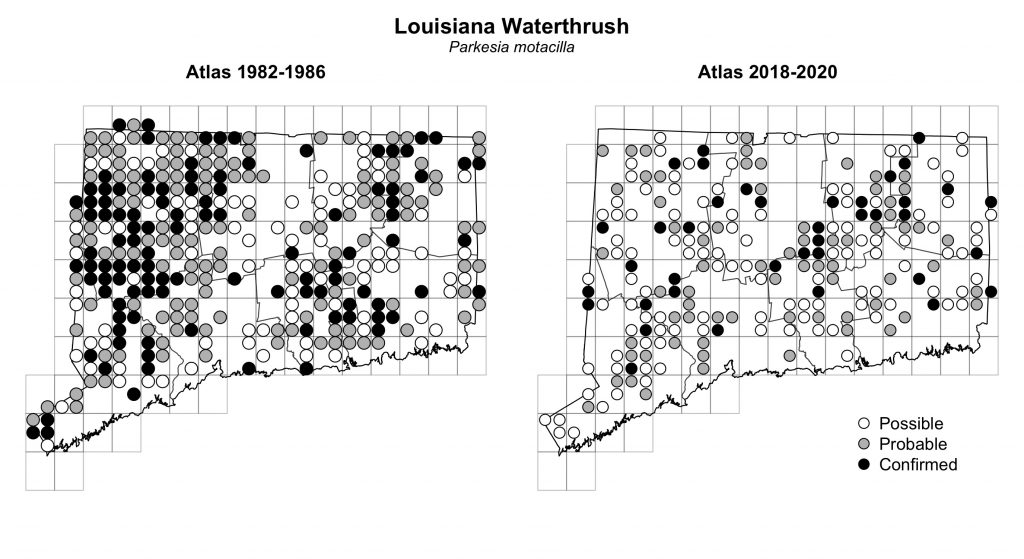 Breeding atlas reports of Louisiana waterthrush in Connecticut during the 1980s (left) and between 2018 and June 2020 (right). All data are preliminary and subject to review.

Northern waterthrush are also widespread, but have a sparser, more northerly, distribution: 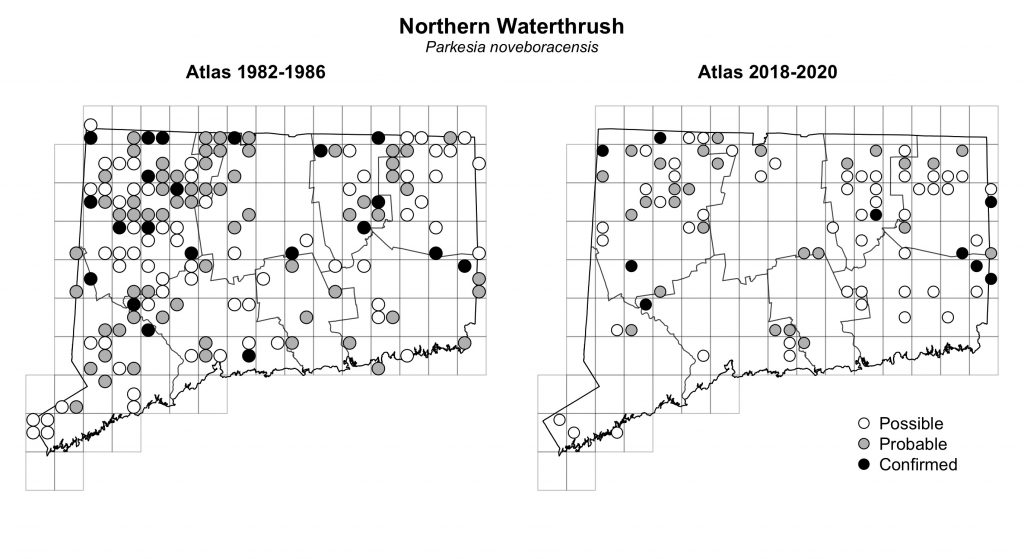 Breeding atlas reports of northern waterthrush in Connecticut during the 1980s (left) and between 2018 and June 2020 (right). All data are preliminary and subject to review.

Both species appear to be less common than in the 1980s, but that is likely to be, at least partly, due to the preliminary nature of the data.

Even if your local waterthrushes have not started to migrate, they will do soon, and – although you probably won’t find nest – now is the time to get out and look for family groups.