Yesterday I wrote about night birds, but didn’t mention owls.  On my return from whip-poor-will listening last week, though, I also heard a pair of great horned owls calling from my yard.  Last summer, I confirmed breeding for this species when I heard both the parents and young owls calling.  Surprisingly, this was the only report of this species in Tolland County, and there were relatively few elsewhere in the state – in stark contrast to the pattern in the 1980s:

Similarly, a superficial look at the status of screech-owls, suggests a widespread decline since the 1980s:

For these species, under-reporting seems likely to be a major cause of the discrepancy, and we encourage everyone to report their owl observations to help us evaluate this idea.

The one reason to worry that the declines might be somewhat real is that we don’t see such a dramatic difference for a third species, barred owl: 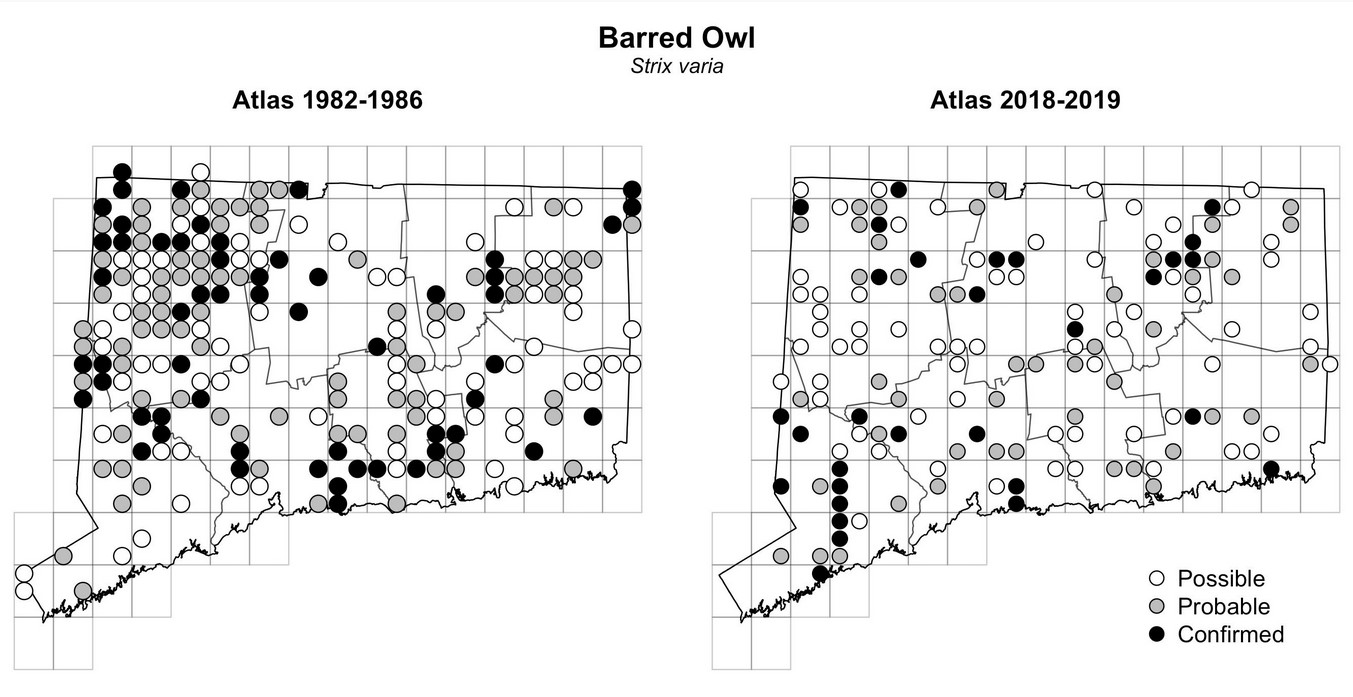 There are certainly fewer records, especially in Litchfield County, but nothing like the dramatic difference seen for great horneds and screech-owls. Of course, barred owl is the most diurnal of the state’s breeding owls, regularly calling – and often being observed – during the day. And, a leading hypotheses for why they were so numerous over the past winter is that they had a really good breeding season last year.  But, without more data it is hard to know what exactly is going on.

So, if yesterday’s post was not enough to encourage you to get out and do some night birding, hopefully the desire to learn just what is going on with the state’s owls will provide an added incentive.

Coda: If you are concerned about reporting the locations of nesting owls, remember that it is possible to hide records in eBird – or to submit the information directly to the atlas team. If you do this, we will only report it at the level of an atlas block, which is unlikely to reveal the exact location. Taking these steps is advisable for nests or regular roost sites, but is probably not necessary if you just see or hear an owl. If you are lucky enough to encounter one of the rarer species not mentioned above, then hiding the location is definitely a good idea.