The orioles in my yard are not posing as nicely as when they first returned; no longer coming into the feeder oranges now that there’s plenty of natural food for them eat. And, if it weren’t for their chattering calls and periodic songs, it would be much less obvious that they’re still around – just hidden among the leaves. But, they’re here, and now is a good time to confirm breeding. 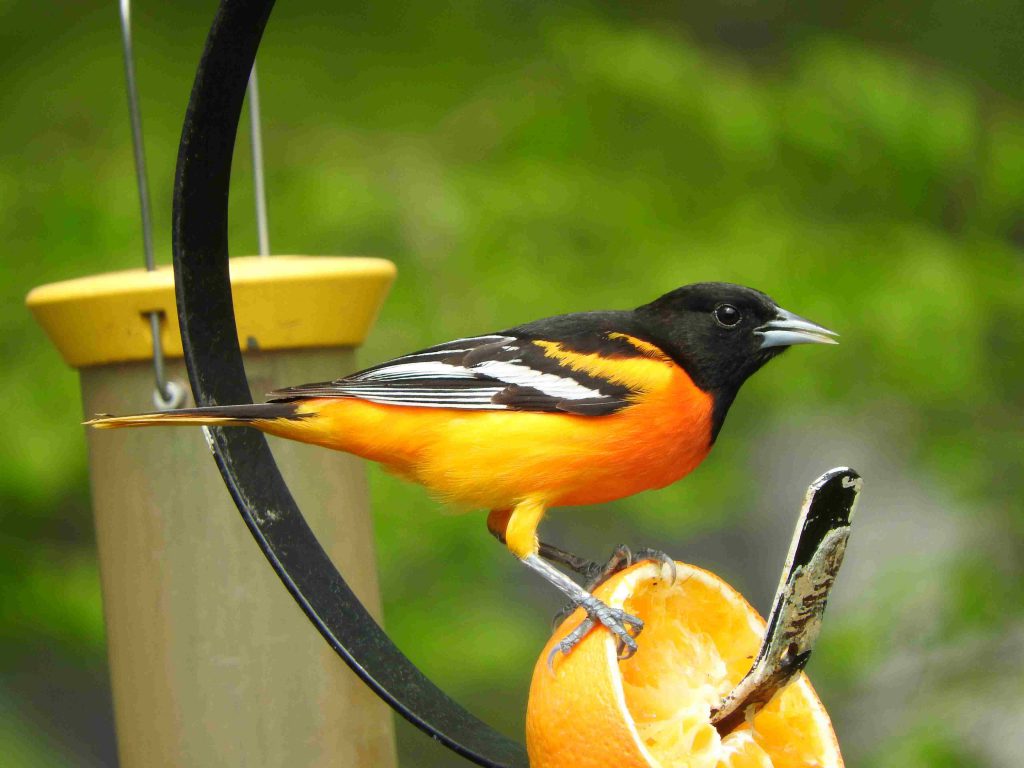 Oriole nests are among the easiest North American bird nests to identify, forming hanging baskets high up in a tree. Often they are placed in the outer branches – a pattern that has been suggested to be more common in areas where squirrels are more likely to pose a predation risk – and frequently they hang from the lowest branches, making it easier to see them if you can get just the right angle. 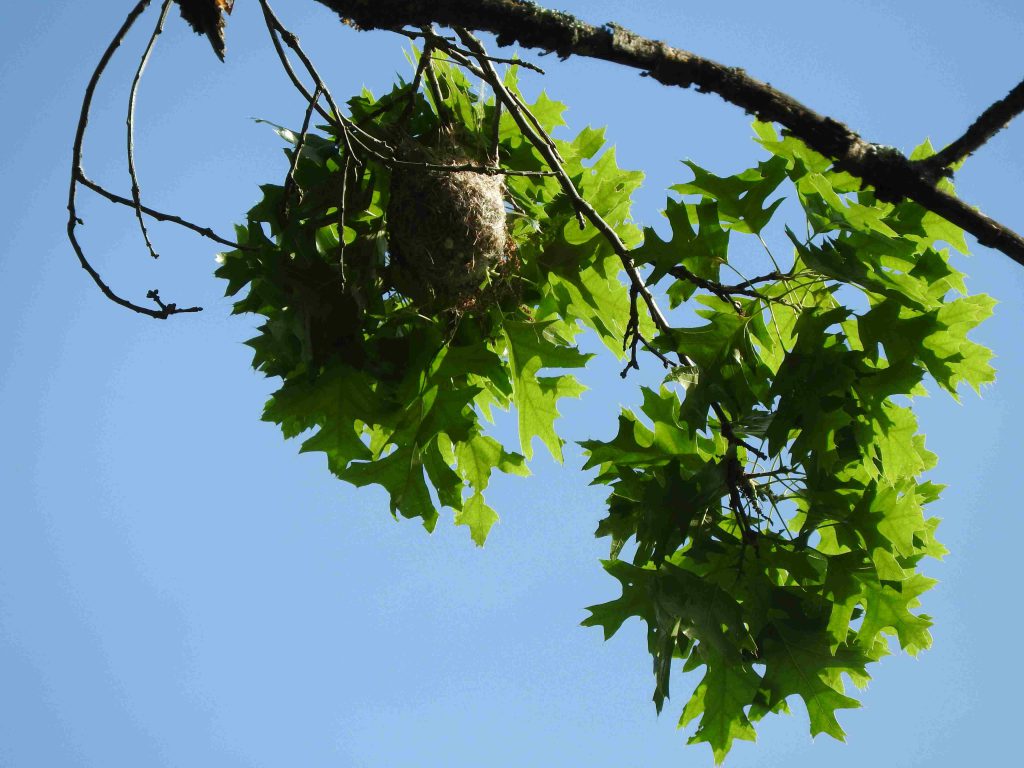 By looking carefully when a bird disappears into a clump of leaves like that shown here, it is often possible to find a nest. Right now, the orioles nesting around my yard clearly have young in their nests as I see the adults flying back and forth from across the street into the trees by my house all day long. Often taking the exact same route on each trip, once I started looking carefully I could see the small bundles of insects protruding from the birds’ beaks each time they flew in. This repeated back and forth with food is a sign that they are not just carrying food, but carrying food for young (the full definition of the CF breeding code).

Baltimore orioles are found throughout the state. During the 1980s they were found in most blocks and confirmed in a large majority. The current project also shows them statewide, although there are still a lot of gaps, and many fewer confirmations.  It’s too early to tell if this implies a decline, but a concerted effort to fill gaps will help us know. 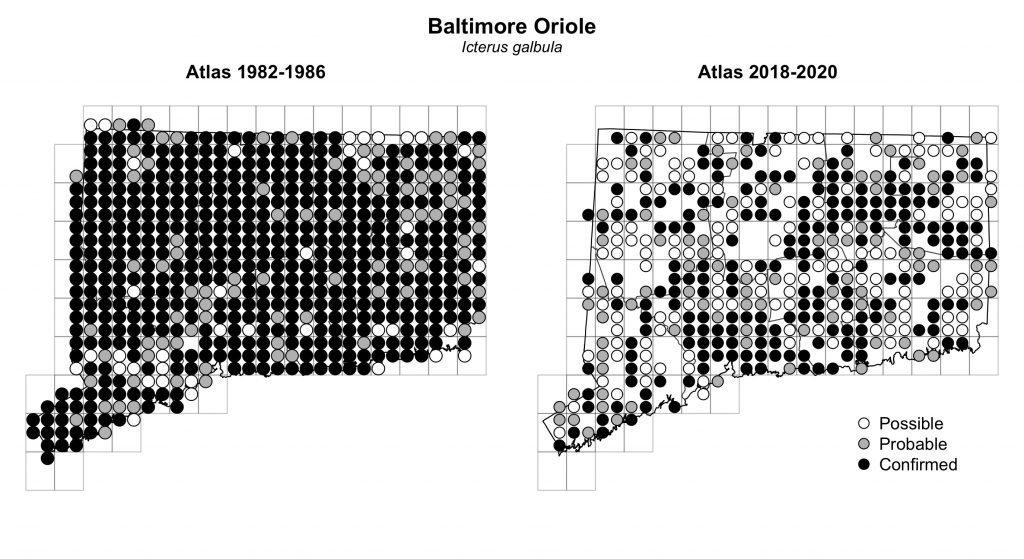 Breeding atlas reports of Baltimore oriole in Connecticut during the 1980s (left) and preliminary data from 2018-2020 (right).

In addition to the well known Baltimore oriole, there is a second species, the slightly smaller orchard oriole.  This species is also found throughout the state, but has a much spottier distribution. Unlike Baltimore orioles, the number of orchard oriole records is not so different from the 1980s, suggesting that – after we account for search effort – they may even have increased. They also appear to declined a little in western Connecticut, and perhaps increased to the east. Again though, it’s hard to know if these patterns will hold up to scrutiny as we collect more data and do a better job of accounting for variation in search effort. 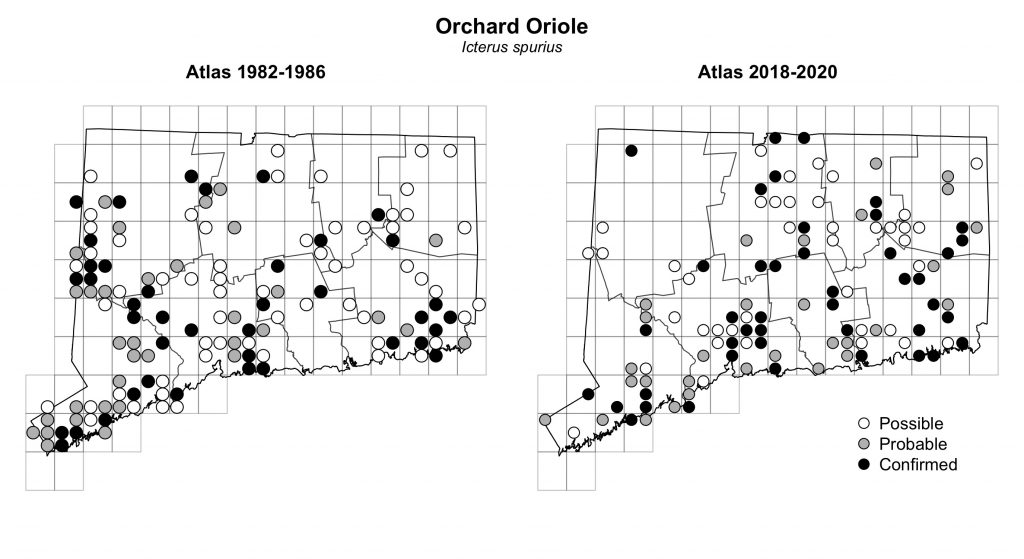 Breeding atlas reports of orchard oriole in Connecticut during the 1980s (left) and preliminary data from 2018-2020 (right).