In my last post I described the value of birding in July, as there are many good opportunities to confirm breeding by species. That was the theory, though; how does it translate into practice?

As many have pointed out, one of the tricks is to slow down your birding, to carefully watch every bird, and sometimes to just pick a likely spot and see what happens. For example, yesterday I was out walking along a gravel road in an under-surveyed block on the Massachusetts border.  I’d been seeing birds steadily, but the birding was fairly slow.  Up in front, I saw a woodpecker fly up into the top of a tree about 50 yards away. Although I could tell immediately that it was a red-bellied, I looked with my binoculars and was pleased to see it had a plain grey head, with no red (see this example here), meaning that it was a youngster recently out of the nest (code FL).

As I lowered my binoculars, another woodpecker flew into a sapling right next to me. This one was small, obviously a downy, and did have red on its head – but on the top, not the back of a crown as on an adult male – another fledgling, another confirmation.

Out of the corner of my eye I saw another movement in the dense vegetation just above head-height on the other side of the road. This turned out to be an adult Baltimore oriole.  As I watched it, though, I realized there was a second bird hidden in the leaves just above, the oriole’s offspring, which it proceeded to feed (code FY).

Through this whole period I’d also been hearing white-breasted nuthatches and black-capped chickadees, and I finally took the time to look up into the canopy to see if I could see them.  Sure, enough there was a family group of each, with young nuthatches hopping around on the bark, and an adult chickadee feeding its two offspring.

Over the next 20 minutes I got about 50 more yards down the road, picking up a young chipping sparrow (covered in streaks, quite unlike the adult it was with) and adult red-winged blackbirds, American robin, and American redstart all carrying food.  I also saw or heard at least a dozen more species that I didn’t confirm as breeders. By the time I got back to my car – two hours later – I’d confirmed 21 species in the block. 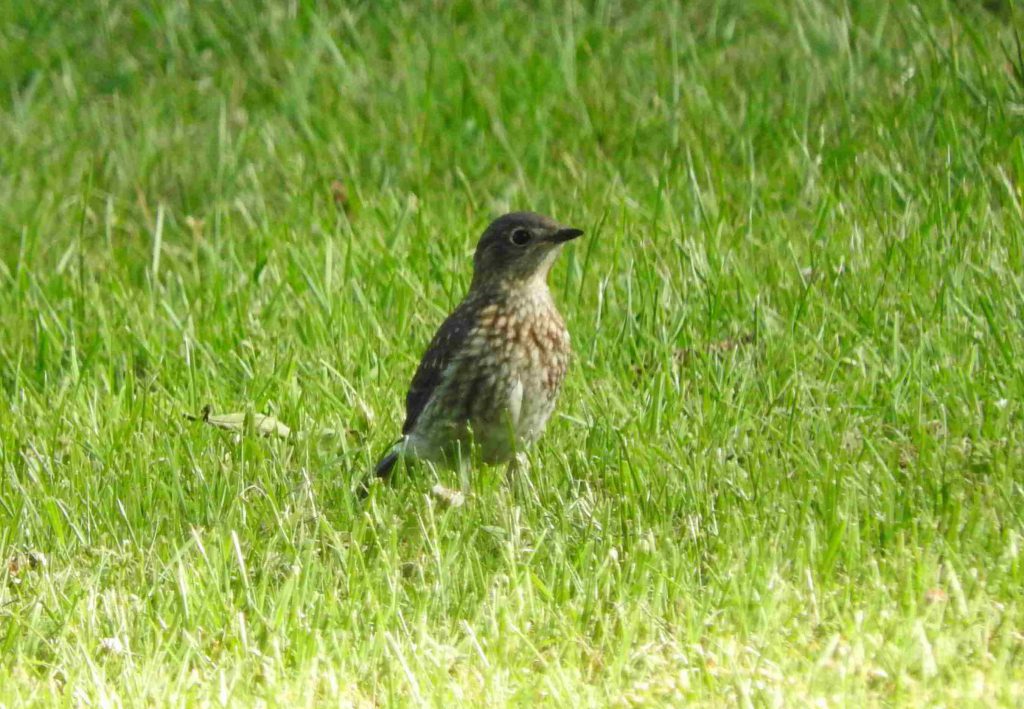 The spotted plumage of young eastern bluebirds makes them easy to distinguish from adults, while also revealing their close relationship to the thrushes.