Although great blue herons can be found in the state throughout the year, many migrate south during winter, and those that remain tend to retreat to the coast as freshwater wetlands freeze over. Several posts on the ctbirds listserv this week have shown that great blues are starting to return to their nesting colonies, and the next couple of weeks – before the leaves start to emerge – will be an ideal time to check all the swamps in your atlas block for active nests.

Any small wooded swamp has potential to hold a few nesting pairs. Even though birds typically nest in dead trees, the foliage on surrounding trees can make them much harder to see after leaf out begins – so it pays to get out soon and check any likely spots. 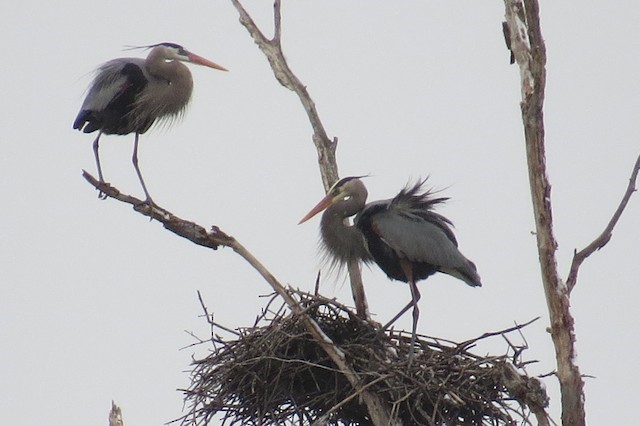 These great blue herons were photographed by Jannie Shapiro at Wangunk Meadows WMA a year ago (7th March 2018; full eBird checklist can be viewed here; photo used with permission).

The 2018 breeding season alone has produced evidence of confirmed breeding in more atlas blocks than was found in the first atlas in the 1980s. Whether this difference represents a real increase is hard to say at this point, but ensuring good coverage of all atlas blocks will help us assess change at the end of the study.

Comparison of historical data to 2018 also suggests that there may be more heron colonies in the southern half of Connecticut now than there was during the first atlas. Simultaneously, there appear to be fewer occupied blocks in the northern tier of the state. The northwest and northeast corners, however, have also received the least coverage so far, so this pattern might simply be a result of reduced survey work in those regions.

Comparison of great blue heron records from the first Connecticut breeding bird atlas (1982-86; left) and from the 2018 field season of the current atlas (right) . Note that 2018 data are preliminary as data review is still ongoing.

To help fill out the picture, we’d encourage you to stop and check any likely looking swamp, even if it is not in your block. For example, last year I found a heronry less than 10 minutes from my house, on a road that I’ve driven hundreds of times in the past 20 years. When I mentioned this to a friend of my son’s, who lives right next to pond, I was told “yeah, they’ve been there my entire life”.  Sometimes all it takes a quick scan to make a valuable discovery.