Over the past couple of weeks, ravens have been a regular sight at UConn. Displaying from the roof of the visitor’s center, wheeling over the parking garage, and yesterday I even heard one while sitting in my office. The species has nested in a farm building near the university’s Depot Campus for a couple of years and is seen throughout the area, but this is the first sign that they might nest right on the main campus.

As winter recedes, signs of breeding are everywhere, and ravens are one of the earliest nesters in the state. As reports on the ctbirds listserv show, many pairs are already on eggs, and confirmed 2019 breeding records have been coming in for a while. For example, Dan Rottino documented this nest at West Thompson Lake, a month ago (photo used with permission, see Dan’s eBird checklist here): 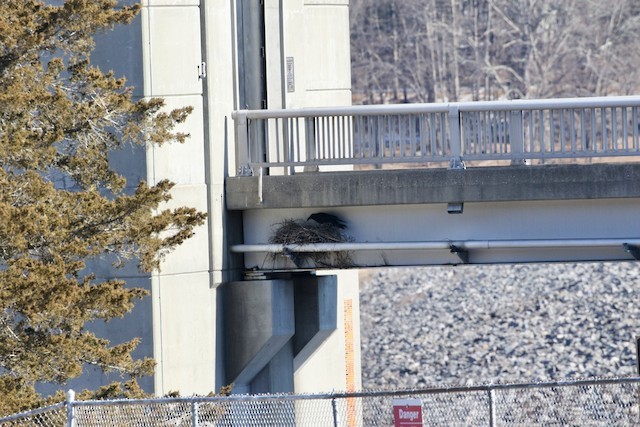 Ravens are one of the state’s birding success stories. At the time of the first atlas, they were only just beginning to return to Connecticut after being largely absent since European settlement. In the mid-1980s, probable breeding was documented in the northwest corner of the state, but it was not until 1988 (two years after the first atlas ended) that the first confirmed breeding record in modern times was obtained from Boston Hollow in Ashford.

Data from the first breeding season of the current atlas illustrate how widespread the species now is in the state:

Maps from the first Connecticut breeding bird atlas conducted during 1982-86 (left) and from the 2018 field season of the current atlas (right) show the expansion of the common raven’s range, with confirmed breeding in all of the state’s counties. Note that 2018 data are preliminary as data review is still ongoing.

Although the 2018 data give us a good sense of the extent of breeding by ravens, we still want to know just how much the population has increased. The safe dates for raven breeding run from 20th March until 20th July, so this week is an ideal time to start reporting all sightings of the species (information on data reporting is here), and to start looking for nests in areas where birds are seen frequently but breeding has not been confirmed.

Old buildings, dams, bridges, and radio towers, are all potential nesting sites, as well as more natural locations, like cliff faces. Birds carrying sticks (breeding code CN) also confirm breeding, but be careful using this code if the birds are seen near to a block boundary – in these cases, it is best to note the direction the bird is flying and to try to find the nest to ensure that the record is logged in the block where nesting actually occurs.  Similarly, remember that the CF (carrying food) code should not be used for ravens or other corvids, because these birds frequently fly around with food that they will eat themselves, meaning that the behavior is not necessarily a sign of nesting nearby (more on this problem here).

To read a post about ravens from this time last year, go here.