In a post on the CTbirds listserv yesterday, Will Schenck described watching a yellow-billed cuckoo at Greenwich Point Park. Cuckoos are species that I long thought of as relatively hard to find in Connecticut. In the past 3-4 years, however, I have been seeing them much more often. In fact, right now, I usually see or hear multiple cuckoos, and often both species, any morning I go birding in deciduous forest or open shrubby habitat. Part of the apparent increase may just be that I’m spending more time birding in those habitats than I used to, especially with all the atlas field work I’ve been doing. But I have assumed that the gypsy moth outbreak of recent years has also played a role and increased the numbers of these caterpillar specialists.

In his post, Will raised the question of whether cuckoos are mostly inland breeders in Connecticut, so I took a look at the atlas data, both to examine this idea and to determine whether cuckoos really are more common than they used to be. As we have said many times, all current atlas data must be viewed as incomplete and preliminary, but an initial look at the maps does not support either idea. 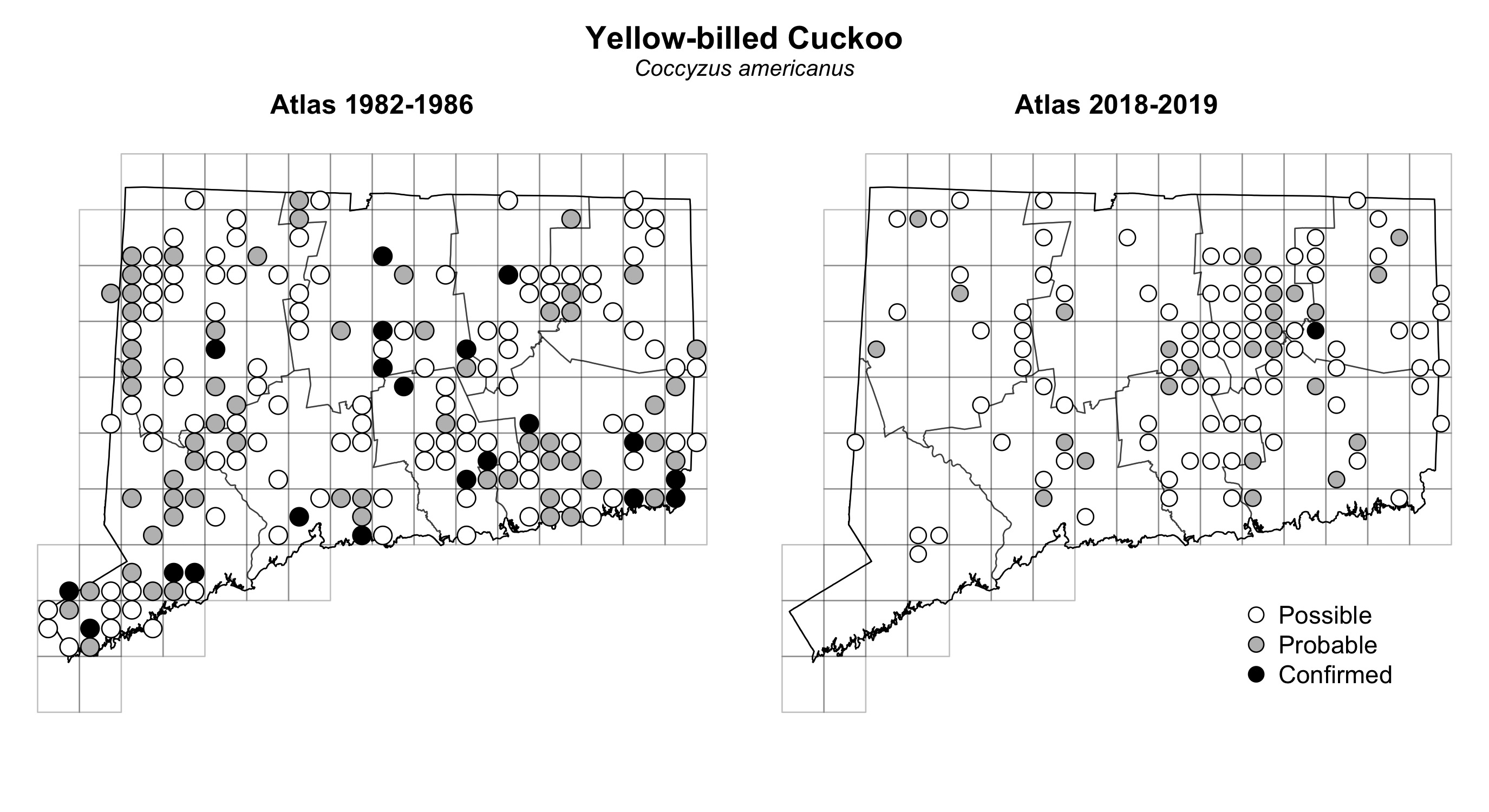 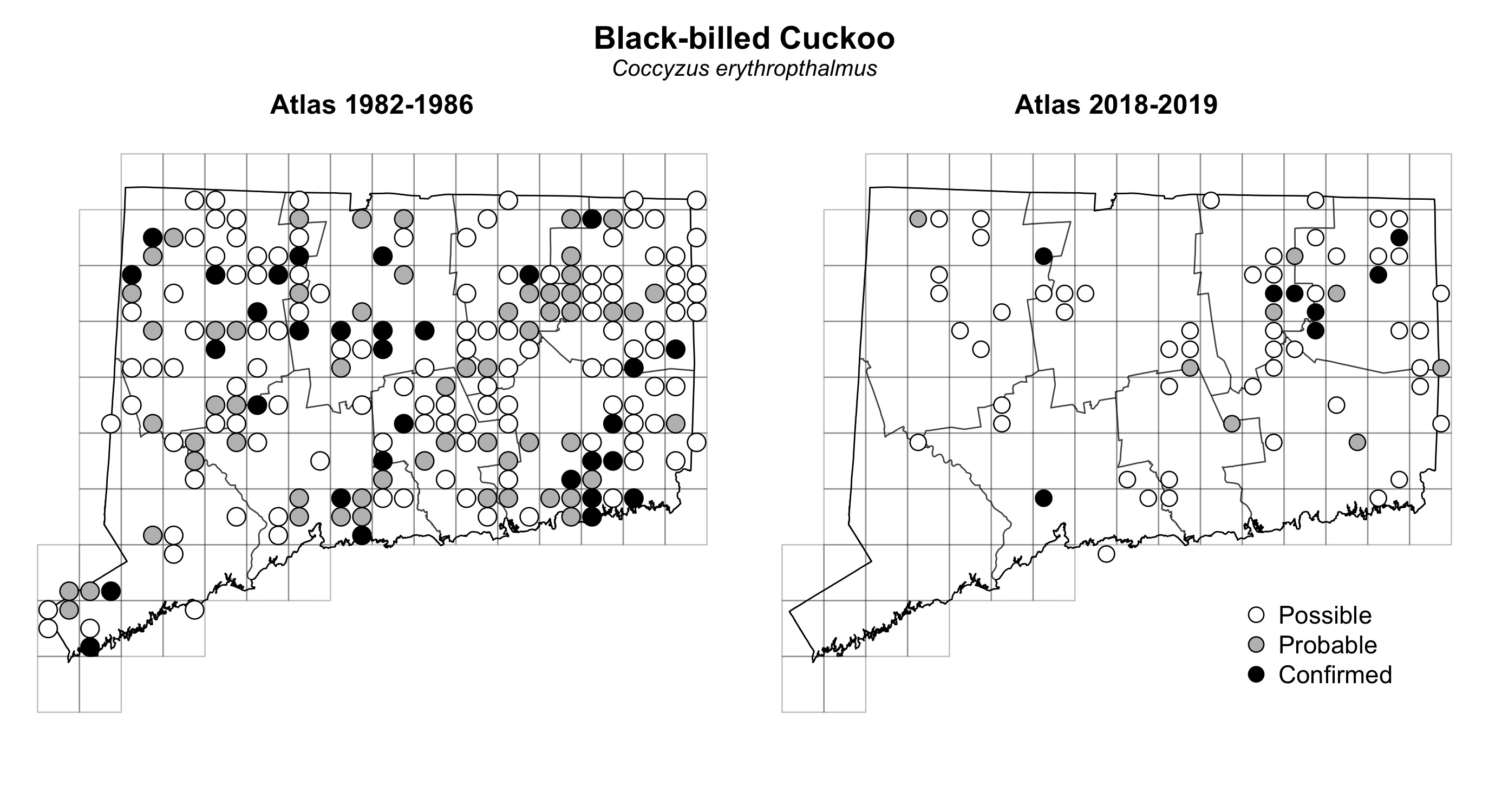 First, the coastal question. It is true that there are few reports along the coast from the current atlas. But a look at data from the previous atlas makes clear that coastal breeding was not at all unusual in the 1980s, and reveals no obvious coastal-inland divide.

Comparing each pair of maps also shows that cuckoos have been seen in many fewer blocks in the current atlas than the previous one. This result, of course, could simply be that we are only half way through the second year of the current project and there has been less search effort – but the predominance of recent cuckoo records in eastern Connecticut – where atlasing effort has been lowest – suggests that that might not be the whole story. If the 2018-19 maps simply reflected birder effort, we would expect most records  in the central third of the state, where most atlas work has been done.

So, what is going on? Cuckoo populations are known to fluctuate in response to caterpillar outbreaks, and I suspect that what we are seeing is partly a response to that. Up until the 1980s, gypsy moth outbreaks were common in Connecticut, but since then an introduced fungus has largely controlled the invasive moth. The dry springs of the past few years, however, have resulted in the largest gypsy moth outbreak for several decades.

Additionally, the USGS Breeding Bird Survey shows that both cuckoo species have declined throughout the northeastern US since the 1960s. Putting these things together I would speculate that cuckoos have been declining overall, and that numbers during the first breeding atlas were perhaps elevated by large numbers of caterpillars. Since the 1980s, cuckoos have declined throughout the state – perhaps most obviously in more built-up areas, accounting for the belief that they rarely use coastal areas.  With the recent resurgence of gypsy moths, however, cuckoo numbers have rebounded, though not to their past levels.  This increase is particularly noticeable in eastern Connecticut, where gypsy moths are most abundant, but will presumably account for more sightings throughout the region.

Of course, only a more formal analysis can verify my hypothesis, but the collection of atlas data will help to make such analyses possible. In the meantime, if you want to see cuckoos, I’d suggest that you head to eastern Connecticut and find a nice power cut or other shrubby area with adjacent forest.  And, if you do that in an atlas block with little previous birding effort, and report all your observations, you will also contribute importantly to the atlas data set. 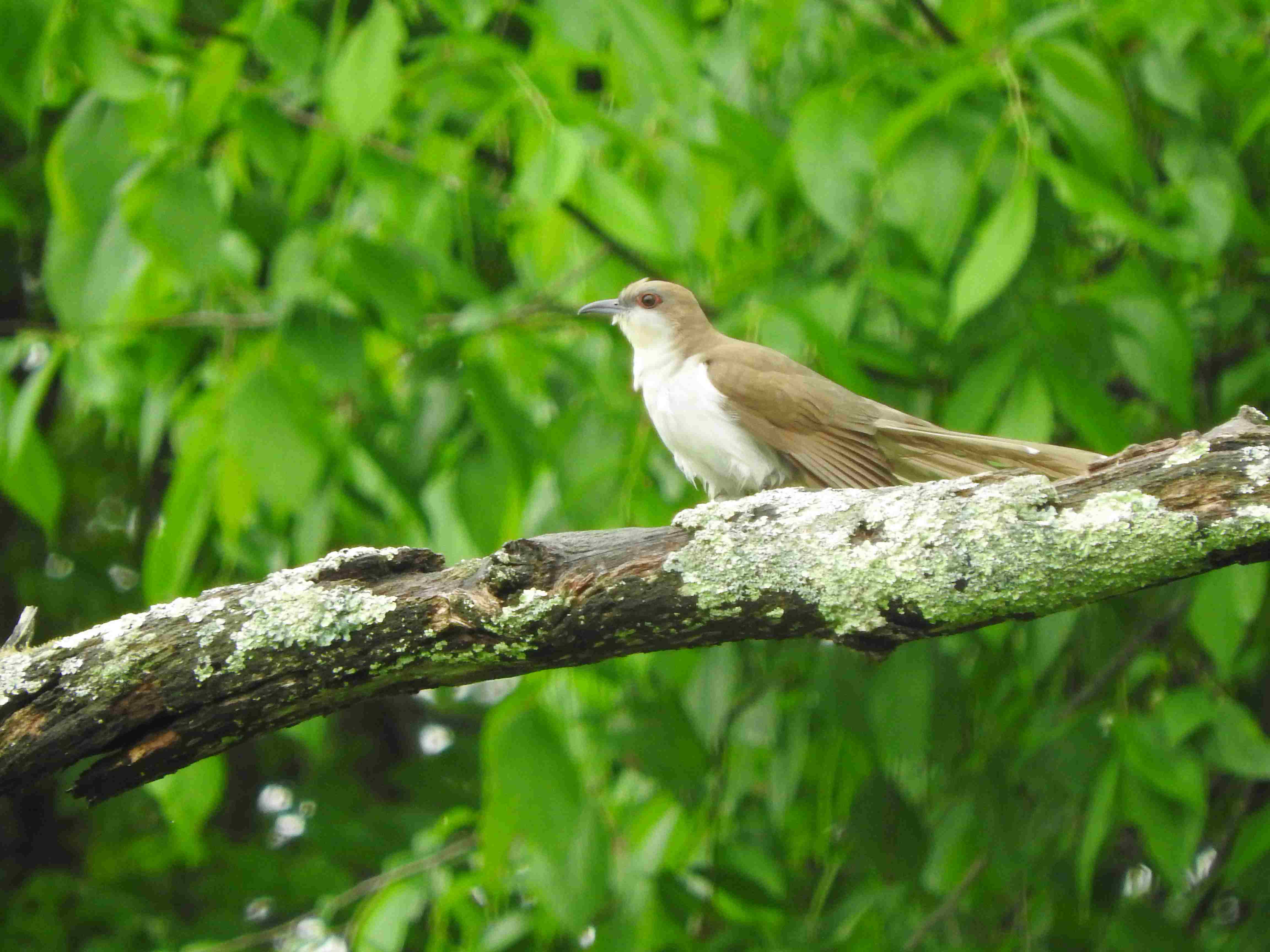