A hooting great horned owl in my yard last night, prompts me to remind everyone that, although we are still in the depths of the winter atlas, we are also a month into the reporting safe dates for Connecticut’s largest nesting owl.  Any great horneds heard or seen between now and June should be considered potential breeders.  If they are in breeding habitat, then they will count for both the breeding and winter atlases.

Most great horned owls should be reported using the breeding code H indicating a bird in suitable nesting habitat, or S if they are giving breeding-related vocalizations. If there are two birds and you can distinguish the sexes by voice, then consider using the P (pair) or C (courtship) codes. If you hear birds from different pairs hooting back and forth, or birds repeatedly calling in the same place over a period of at least 7 days, then code T (territorial behavior) is appropriate. If you have previously reported owls between 1 Dec and 15 Jun, but did not include breeding codes when doing so would have been reasonable, then consider going back and editing the checklist. If you do that, simply re-share the list with the atlas and we will know to update our data.

Owls are some of the hardest birds to monitor, so please do not assume that we already have data from your block.  To illustrate – although our data are not completely up to date (we are hoping to do an update in the next week or so) – here are maps of the great horned owl data we already have in the atlas database.

The first maps compare records from the 1980s breeding atlas to modern breeding records received up until the end of this past summer: 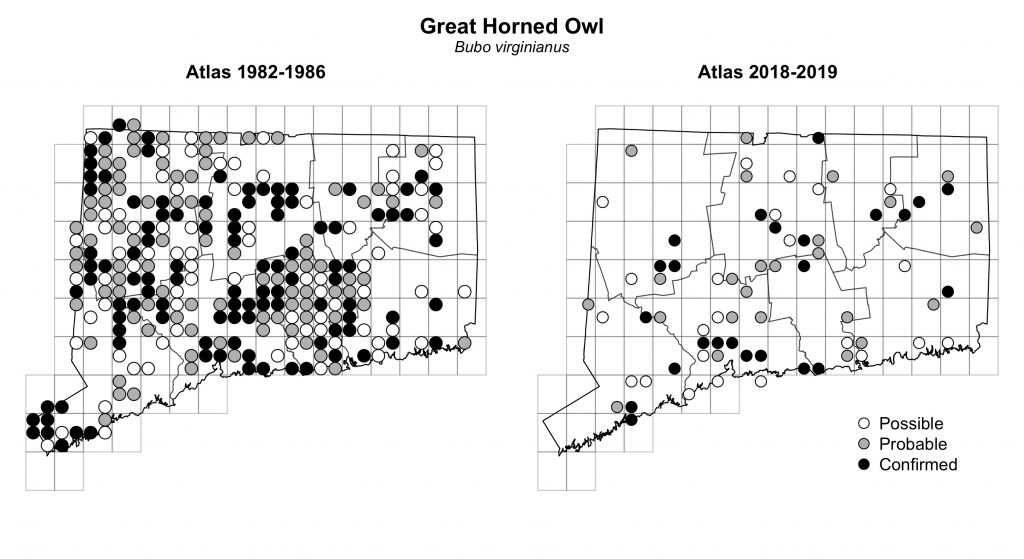 The difference may indicate a decline in the species, but it is very likely that much of difference is due to fewer nocturnal surveys in the current project.  Distinguishing these explanations by ensuring that blocks are surveyed at night should be a high priority for 2020.

Although we cannot make historical comparisons, data from the winter atlas also tell us something about reporting patterns. The maps below show the great horned owl records in the atlas database up until mid-November 2019. The lack of records in several areas where great horneds are regularly found during Christmas Bird Counts demonstrates that our data is far from complete. If you found owls during a Christmas Count, then please report those to the atlas too. 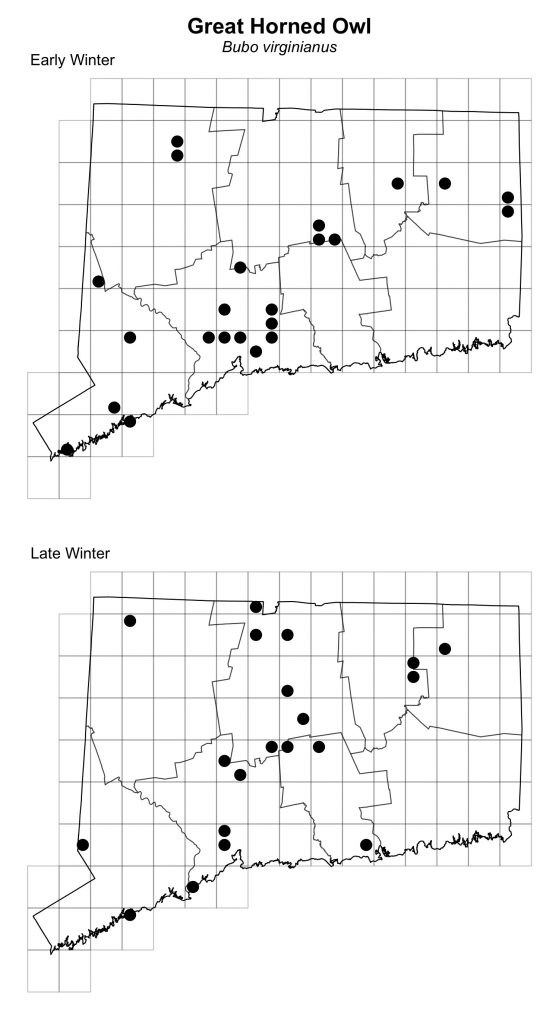 Of course, care should also be taken with reporting owls as they are birds that many people want to see, and this interest can cross the line into disturbance if one is not careful. I ran into this dilemma myself on a recent Christmas Count and opted to openly report those at sites where eBird already has multiple public reports, or where it would be hard for someone to find exactly where a bird was (e.g., because the hooting was in the distance across private land), but to hide my reports for other sites. Options for reporting without making the information too public are available in a former blog post here.